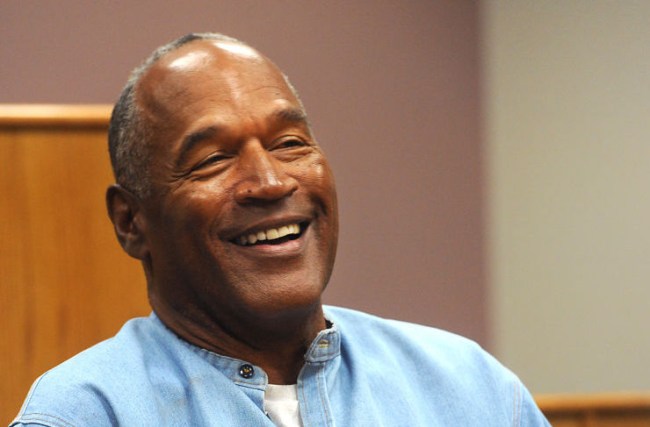 To say O.J. Simpson has had to deal with some legal issues over the course of his life would be the ultimate understatement, and while he wasn’t found guilty of murdering Nicole Brown and Ron Goldman, he did eventually end up in prison after deciding it’d be a good idea to rob some dudes at gunpoint.

Simpson was sentenced to 33 years thanks to his role in that crime but was released on parole back in October of 2017 after serving nine years, and since then, he’s kept a fairly low profile.

However, he recently decided to step back into the public eye when he was interviewed by the Associated Press and said he’s done talking about his infamous murder trial. However, it looks like he’s more than happy to address some other subjects.

Over the weekend, Simpson joined Twitter and cryptically announced he had “a little getting even to do” in his very first tweet.

Shortly after, he posted another clip in which he announced he’d be using the platform to clap back at people who have said derogatory things about him over the years.

Thanks to all my new followers. Love learning how to use Twitter. pic.twitter.com/J4JnN59yKl

On Sunday night, Simpson followed through on his promise when he posted a two-minute video in which he finally decided to address one of my favorite conspiracy theories of all time: that he’s Khloe Kardashian’s real father.

A few weeks ago, Norman Pardo—a man purporting to be Simpson’s former manager—claimed the fallen star had a wild sexual encounter with Kris Jenner back in 1990 when she was still married to Robert Kardashian—a claim Simpson firmly denies.

The first thing I want to set straight is this story Pardo (who was not my manger) is talking about all over the media regarding me & @KrisJenner pic.twitter.com/tZ9EJd4qxF

Simpson says Pardo lied about being his manager (he did acknowledge the two men had business dealings with each other in the past) and that he never had any romantic or sexual interest in Jenner—nevermind a tryst.

As a result, he says the youngest Kardashian sister could not be his child.