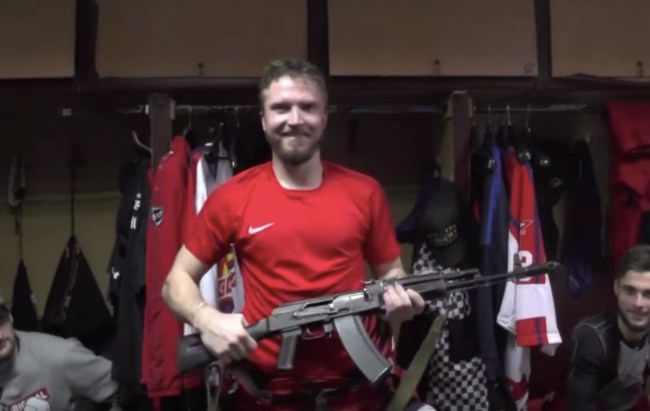 The Miami Hurricanes changed college football with their turnover chain, a tradition that pretty much every team in college football quickly tried to emulate. Of course, the ‘Canes didn’t invent props. Professional wrestling has been making a living off of props for decades but the Turnover Chain™ was the first time in recent memory that props were brought into real sports.

A Russian hockey team is making headlines for introducing a team trophy that’s unlike anything you’d ever see in American sports. Well, I say that but this is America and anything’s possible so you could definitely see this happen in pro sports here at some point but this makes A LOT more sense in Russia.

Russian hockey team Izhstal Izhevsk (HC Izhstal) is based out of Izhevsk, Udmurtia, Russia and they currently play in the Supreme Hockey League. They were founded in 1949 and have been in the SHL since 2006 but this is the first time I’ve ever heard of them.

Their making waves because they’ve debuted an AK-47 as a trophy presented to the Player of the Game. Officially known as the Avtomat Kalashnikova, the AK-47 was invented by Mikhail Kalashnikov in 1949 back in the Soviet Union days and it became the most popular gun in history. “Of the estimated 500 million firearms worldwide, approximately 100 million belong to the Kalashnikov family, three-quarters of which are AK-47s”.…That’s a shit-ton of AK’s.

Here’s the Player of the Game presentation in Russia with the coach giving the chosen player his ‘gas-operated 7.62×39mm assault rifle’

The players seem to be in on the joke, at least a little:

The players seemed amused with the new gimmick, but are also aware of the implication.
“If we play poorly, they will shoot us,” the players joked, according to Russian news service Pravda.

Will they actually be shot if they play poorly? Honestly, I have no idea what goes on in Russia these days. I was supposed to go to St. Petersburg, Russia a few years ago for the ‘World Mixology Championships’ with a Vodka company and I was really looking forward to visiting a new country and seeing what Russia was all about…Then they fucking invaded Crimea and annexed part of Ukraine.

The trip was canceled because Russia started a straight-up war in Europe that’s been pretty much swept under the rug even though that shit only happened back in 2014. And I don’t foresee a free trip to Russia falling in my lap anytime soon and I can’t say it’s at the top of my list of places to visit if I’m spending my own money on vacation.