New Report Details Horrid Things Said To Ja Morant’s Family In Utah: ‘Put A Nickel In Your Back And Watch You Dance, Boy’ 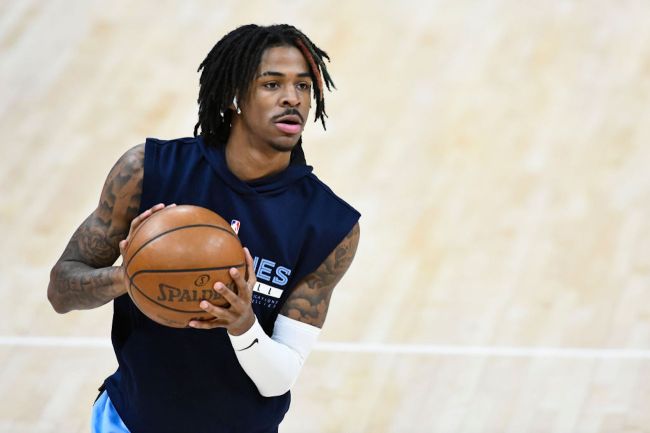 While the return of fans to sporting events has marked a welcome return to normalcy, it’s also served as a stark reminder that there are scumbags within our society who simply don’t know how to act.

In Philadelphia, a 76ers “fan” dumped a bag of popcorn on Russell Westbrook’s head. And not only that, but he did so while Westbrook was leaving the court with an injury. That fan has had his season tickets revoked and has been banned from the Wells Fargo Center indefinitely.

In New York City, a Knicks “fan” spit on Atlanta Hawks guard Trae Young. The Knicks put out a statement saying that, while not a season-ticket holder, that fan has been suspended from Madison Square Garden indefinitely.

RELATED: Trae Young Responds To Video Of Dirtbag Knicks Fan Appearing To Spit On Him During Game 2

Salt Lake City was also the site of a recent fan transgression, as a new ESPN report has detailed the horrid things said to Memphis Grizzlies guard Ja Morant during Game 2 against the Utah Jazz.

Tee Morant [Ja’s father] said one fan made a sexually explicit remark to his wife, Jamie. Tee Morant, who was sitting a couple of seats over, confronted the man before security deescalated the situation, ejecting the Jazz fan.

According to Tee Morant, another Jazz fan told him, “I’ll put a nickel in your back and watch you dance, boy.” Several other Jazz fans, who had been enjoying good-spirited trash talk with the Morants and their family friends, confronted that fan and alerted security. Tee Morant said he was shocked that the Jazz fan, who was ejected, made such a comment with the man’s young daughter by his side.

The third fan who was ejected yelled at Jamie Morant, “Shut the f— up, b—-,” Tee Morant said. [via ESPN]

In a tweet, Morant stated that his family “felt the love” from all of the other Utah Jazz fans and that it was just three individuals who “went too far”

my family told me they felt the love from all the other jazz fans who were around them 🤝 even bought each other drinks with a few.

those 3 just went too far 💯 https://t.co/1XvjXcPVOo

In a statement, the Utah Jazz confirmed that all three fans have been banned indefinitely.

“The Utah Jazz have zero tolerance for offensive or disruptive behavior,” the Jazz said in a statement Thursday. “An incident occurred last night involving a verbal altercation during Game 2. Arena security staff intervened, and the investigation resulted in the removal and banning of three Jazz fans indefinitely. We apologize to all who were impacted by this unfortunate incident and condemn unacceptable fan behavior.”

As for Tee Morant, he plans to be back in Salt Lake City the following week, reportedly telling the fans who engaged in friendly banter with him: “You better know I’m going to be back when we’re up 3-1 and close you out.”

Game 3 of the Jazz-Grizzlies series will tip-off in Memphis on Saturday night at 9:30 p.m. EST.