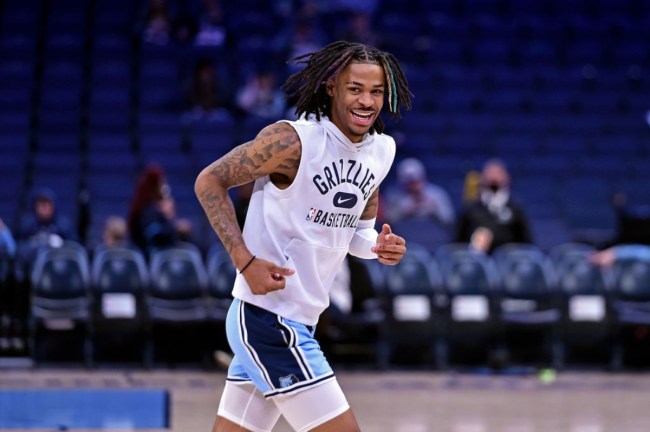 The Grizzlies are cooking up something extremely special in Memphis and it has a lot to do with Ja Morant, who is playing at an other-worldly level at the moment.

Since returning from injury in mid-December, Morant has averaged 26 points, 6.5 assists, and 6 rebounds en route to being named the Western Conference’s player of the week in consecutive weeks. Meanwhile, the Grizzlies have won a franchise-record nine straight games as they’ve gotten unbelievable production out of quite literally everyone on the roster, specifically Desmond Bane and Jaren Jackson Jr.

While the Grizzlies as a whole are clicking on every level, Morant is moving at warp speed. Every night he takes the floor he’s bound to do something that’ll make you literally jump out of your seat.

During Memphis’ win over the Lakers on Sunday night it wasn’t a ridiculous pass or dunk from Morant that made basketball fans say wow, instead it was a ridiculous two-handed block.

Morant’s fingers were level with the top of the square on the backboard as he pinned Avery Bradley’s shot to the glass.

Morant’s block against the Lakers was certifiably different, but not for him.

The former second-overall pick has been pulling off electrifying blocks since his college days at Murray State.

JA BEEN DOING THIS SINCE COLLEGE!??? 😳@JaMorant

What’s shocking is that the clip SportsCenter tweeted out isn’t even Morant’s best college dunk.

During that same Murray State season, Morant showed off his bunnies with another block where his elbow was above the rim.

While Morant may have caught some heat in his first game back from injury complaining about a fan – and rightly so – it’s safe to say he’s back on everyone’s good side in Memphis.