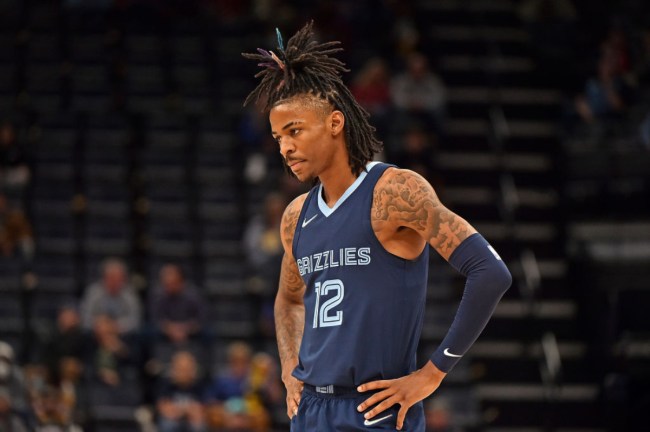 Ja Morant made his long-awaited return to the hardwood for the Memphis Grizzlies on Monday night after suffering a knee injury and dealing with health and safety protocols.

Morant finished the night with 16 points, eight assists, and six rebounds, but his first game back since November 26 didn’t go as planned. Not only did the Grizzlies lose to the Thunder, the same team they beat by 73 points just 18 days prior, but Morant also had to deal with a couple of fans heckling him during the game.

“I was running down the court and I heard some fans courtside tell me I need to sit back out… Normally when anybody says something negative about me, it fuels me. But tonight, the remarks from the fans actually hurt,” Morant said following the game.

Ja Morant sounded disappointed after he said a fan was saying he should sit back out during the game. Also spoke about the mental aspect of coming back from a knee injury. pic.twitter.com/Yf8gbhrPmn

For context here, the Grizzlies have arguably been the best team in the NBA over the past few weeks going 10-1 without Morant in the lineup; they’re 9-11 this season when he is on the floor.

So, some ridiculous fans had those records in mind and were witnessing a Memphis team with Morant lose to a team it recently beat without him by 73 points. The fans were likely the only people in the entire city of Memphis not thrilled about Morant’s return and they just so happened to be sitting courtside letting the point guard know it.

There is always going to be a handful of asinine, more often than not drunk, NBA fans with great seats. This situation is a classic example of that, and it’s not the first time Morant has unfortunately dealt with a few idiotic fans.

Nobody in their right mind believes the Grizzlies are better without the face of their franchise on the court. Sure, Memphis put together an impressive and fun run of 11 games without him, but the Grizzlies are undoubtedly more entertaining and most importantly, better, with Morant in the lineup.

The Fan Is Wrong, But Morant’s Response Is Extremely Soft

Before we get into this, I have to make it clear that I am a huge Morant fan.

As someone who lives in Memphis and has seen the organization go from a complete dumpster fire playing in The Pyramid to a legitimate NBA franchise with the support of an entire city behind them, I’ll be the first to say the trash-talking fans are a complete and utter embarrassment.

Ja Morant is the best thing that’s happened to the Grizzlies franchise since Zach Randolph was dealt to Memphis in 2009. Every Memphian and Grizzlies fan would agree with that, everyone except for this tiny group of fans that got under Morant’s skin.

“I was already in my head coming back out and trusting my knee after missing 12 games… I just don’t understand what they wanted to get out of that. I feel like that just makes it worse.”

off social media for awhile ✌🏽 anybody who need me got my # .

That’s where I have trouble with this whole situation, it sounds like it was less than a handful of fans that were heckling Morant. As I wrote earlier, there’s always going to be those fans at games, Morant letting it get to him is surprisingly soft.

I’m not blind to the fact that Tuesday was a big night for Morant. He had been sidelined for nearly a month, returned to the floor on his home court, and was doing so against a team the Grizz just beat by 73 points.

It was supposed to be a great night, but it simply wasn’t. Add the fact that a couple of fans were shouting at him and he let that get to him.

Morant is obviously free to say whatever he wants to the media, but in my opinion, the face of a franchise should be able to let little things like this go.

Yes, Morant is only human, but he’s a professional athlete that’s royalty in Memphis where 99.9% of the city supports every move he makes. The few fans that bad-mouthed don’t matter at all, but they mattered on Monday night because Morant allowed them to.

The fans that were yelling at Morant are out of their minds. Morant letting that carry all the way into his postgame press conference is a bit soft. Two things can be true at once.