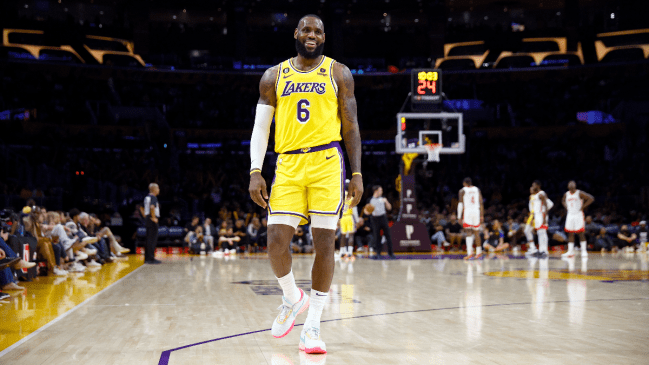 LeBron James is 38 years old. He’s in his 20th NBA season, and he’s shown no signs of slowing down.

By most accounts, 38 isn’t exactly old. I say that as a 30-year-old man who doesn’t want to feel any older than he already does.

But by basketball standards, James is an absolute dinosaur. Especially when you consider that he came into the league at 19 after skipping college basketball.

And it’s not like James is just hanging on for the sake of hanging on. He’s still one of the best players in the entire league. At the age of 38, James is averaging 29.7 points, 8.4 rebounds and 7.0 assists per night for the Los Angeles Lakers.

On the other end of the spectrum, we have Houston Rockets rookie Jabari Smith Jr. Houston selected Smith Jr. No. 3 overall in the 2022 NBA Draft. The 19-year-old has had a solid rookie season for the lowly Rockets. He’s averaging 12 points and 7 assists per game through 43 games played.

But on Monday night, he got one over on James by just letting him know a simple piece of information.

“You played against my dad in your first game.”

“You played against my dad your first NBA game ever,” Smith Jr.. told James as the game was set to begin.

As it turns out, Jabari Smith Sr. was a member of the Sacramento Kings when they played the Cleveland Cavaliers in James’ NBA debut.

James took the ribbing in stride. At least, in the moment. But he then proceeded to hang 48 points, 8 rebounds and 9 assists on Smith in a 140-132 win for the Lakers. It turns out the old man still has moves.