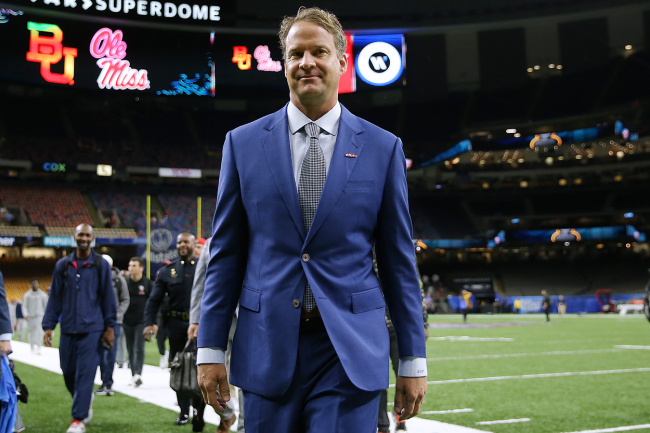 Ole Miss football had its biggest recruiting weekend of the spring over the weekend. The Rebels took to the field for their annual ‘Grove Bowl’ spring game and had a lot of prospects in town to visit.

The biggest name, perhaps, was quarterback Jaden Rashada. Rashada is a four-star recruit out of California who is deciding between Ole Miss, Miami and Oregon and would be a big get for whichever school he chooses.

While in Oxford, the 6-foot-5, 175-pound dual-threat athlete joined-in on the latest trend of taking pictures with Lane Kiffin’s luxury cars.

It all started back in December when Kiffin whipped recruits around in his Porsche. A month later, Jaxson Dart and Michael Trigg took icy photos with Kiffin and his Aston Martin.

Over this past weekend, Lane Kiffin broke out a Rolls Royce and took pictures with multiple top recruits at Ole Miss.

While taking UCF transfer wide receiver Jaylon Robinson out for a spin, he made the message very clear — Transfer To The ‘Sip!

And then there was Rashada, who took things up another notch. Not only did he and Kiffin take some hard photos with the Rolls Royce, but they were joined by a special guest— Juice.

Juice is Kiffin’s daughter Landry’s new yellow lab, which he debuted to the world last week.

In addition to the Grove Bowl and recruiting weekend, it was also one of the biggest weekends in Oxford, Mississippi. Every year, the college town puts on a massive music and arts festival that is headlined by some pretty big-name artists.

This year’s crowd was absolutely massive.

Kiffin got on stage and addressed the crowd alongside tight end Jonathan Hess. They made it very clear how passionate the fanbase is at Ole Miss.

And if that wasn’t enough, Kiffin and the Rebels received a big-time transfer commitment from country music artist Brett Young.

The #PartyInTheSip is very real and what Kiffin is building something special.