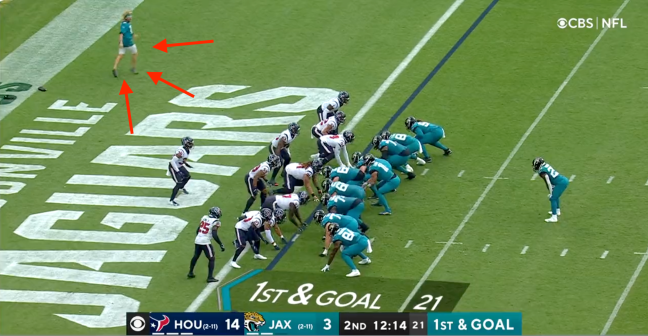 The Jacksonville Jaguars offer the most immersive fan experience in the NFL.

Just not by choice.

A rogue fan ran onto the field during Sunday’s game against the Texans and found his way into the end zone DURING the game. He was absolutely rocked by security, but not before the Jags punched in a touchdown from one-yard out.

In the live CBS shot, you can see the fan, wearing some sort of mullet wig and a Trevor Lawrence, make his way into the end zone in the top right corner. He entered the field of play just moments before Lawrence took the snap and handed the ball off for six.

James Robinson’s got his 8th rushing TD of the year! #DUUUVAL

Had Lawrence called an audible and decided to throw a fade to the flat in the corner, the fan was wide open. He threw up his arms and celebrated the touchdown as it happened.

“Florida Man furious at QB for not passing him the ball” pic.twitter.com/SH4kXhHfiP

And then, seconds later, he got crushed by security. All of the fans in attendance at TIAA Bank Field were on their feet for the inevitable score and their heads immediately turned to the fan as people in the crowd started to point him out.

After nearly making it past the goal line and out of the end zone, security came in to wrestle him down. He never saw it coming and got rocked.

Welp, touchdown @Jaguars and a really dumb fan… only in #DUUUVAL pic.twitter.com/sWWTzIVVXD

It has been a wild year in Jacksonville. Although the Jags may not be very good, at least their fans are making their own fun. This is truly one of the most bizarre “streaker” moments in a long time.