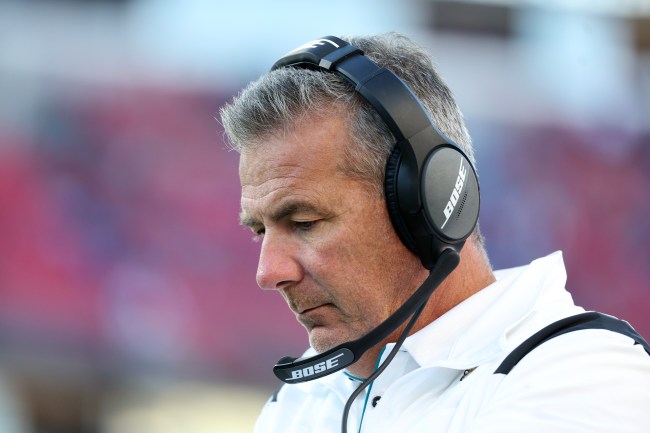 The Urban Meyer era in Jacksonville ended just about as poorly as anyone could have expected. Even interim head coach Darren Bevell couldn’t help but laugh at how things went down.

Nobody, and by nobody I mean only the delusional, thought that the Meyer hire would work out and it didn’t. He is widely disliked by football fans on every level, and it sounds like that is also the case inside the Jaguars organization.

Over the course of less than a year, Meyer stepped on a lot of toes.

He was caught canoodling with a young woman that was not his wife, berated his coaching staff in bizarre fashion, got into it with one of the most respected veterans in the NFL, and pissed off his rookie franchise quarterback Trevor Lawrence. It is easy to imagine that that doesn’t even scratch the surface.

He didn’t win either.

To make matters worse, while all of this was happening off of the field, it was not going any better on the field. Of the 13-game Urban Meyer era, Jacksonville won just two games— and only one on American soil.

Now that Meyer is out, the Jaguars will have four games left in 2021 with interim head coach Bevell at the helm. Two of those games come against the Jets and the Texans, who are both abysmal, and two of them come against the Patriots and Colts.

Bevell, who took over earlier this week, has a legitimate chance to win the same number of games as Meyer. If he can pull off an upset in New England or at home against Indianapolis, Bevell can win more games than Meyer in (a little less than) a third of the time.

A reporter brought up that idea with Bevell during a press conference earlier this week. He could not hold back a smirk and made it very clear how he feels about the idea of out-performing his former boss.

Reporter: "I think you got a really got a chance to finish with more career wins as an interim coach than Urban has a HC."

Bevell ended up biting his tongue on his comments, but his face said everything there is to know about his opinion of and thoughts on Meyer.