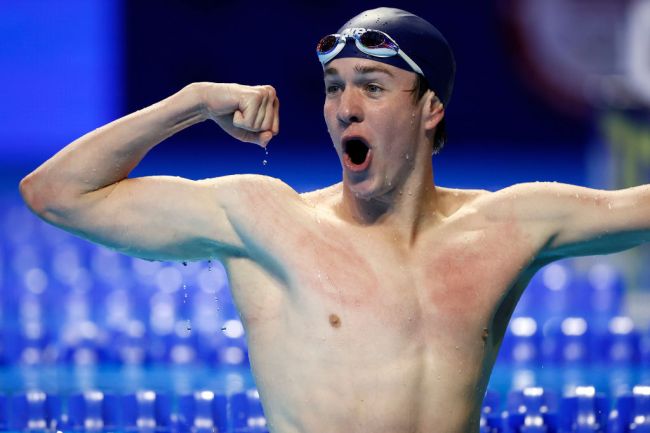 While the rest of his graduating class is spending their summers lifeguarding, at an internship or vacationing in Cancun, University of Michigan rising sophomore Jake Mitchell is heading to Tokyo. The 19-year-old Wolverine was named the Big Ten Freshman of the Year just a few months ago and now he’s (likely) an Olympian.

Mitchell is a freestyle specialist and qualified for the United States swim trials in the 400-meter event. There is not a ton of depth in this Olympic cycle for the 400 Free and the top-two American finishers typically advance to the Games.

A personal best AND a ticket to the #TokyoOlympics?!

Give it up for Kieran Smith! 👏@USASwimming | #SwimTrials21 x #TokyoOlympics pic.twitter.com/DwXcgOEZGF

To qualify for Tokyo, however, swimmers must also meet Olympic standard times in addition to being one of the top competitors from a given country. For the 400 Free event in particular, the Olympic cut is 3:46.78. Athletes must meet that time or faster to make the Games.

Mitchell did not. He swam the final in 3:48.17 — more than a second slower than the required cut — and did not qualify for the Games.

Fortunately, the field had until June 27 to break the standard and received his first opportunity to do so on Tuesday night. In a solo time trial approved by the FINA, swimming’s governing body, Mitchell raced against the clock and tried to crack 3:46.

To do so, he needed to drop 1.39 seconds from his final time, which is a huge number in swimming. After all of the day’s scheduled events, after the T.V. coverage, Mitchell hopped back in the pool for his second attempt at the 400 Free.

In front of a thunderous crowd, he was out in 52.63— more than two seconds faster than the day before. Mitchell picked up his pace even more and was nearly three seconds ahead of his Monday time at the halfway point.

With 50 meters to go, he was nearly 2.5 seconds ahead of his original pace. 28 seconds later, Mitchell touched the wall at 3:45.86. It was 2.3 seconds faster than his first time and almost a full second faster than Olympic standard. He did it.

NBC Sports posted the entire time trial on YouTube later this week and there has not been a more electric moment in swimming since Michael Phelps. The thunderous crowd was going wild.

Spots are limited on the U.S. Olympic team and there is always a chance that Mitchell could be processed out, but such an occurrence is rare. The 19-year-old is heading to Tokyo as an Olympian.