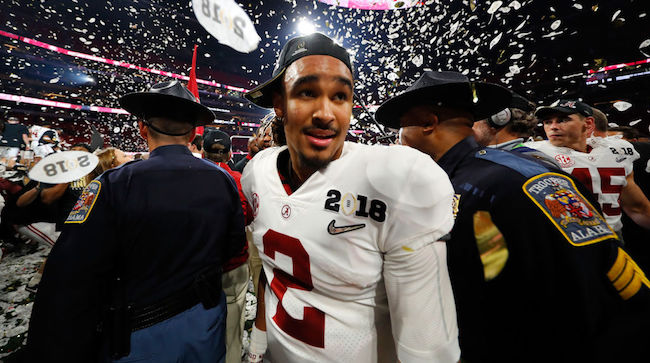 At the end of the second quarter in last night’s College Football Playoff Championship, the Georgia Bulldogs walked into the locker room sporting a 13-0 lead over the Alabama Crimson Tide. The closest Bama came to scoring the entire half was a 36-yard field goal attempt by Andy Pappanastos that ultimately went wide left (which would become a recurring theme over the course of the night), and it was clear Nick Saban would have to shake things up a bit if he wanted to turn the game around.

Alabama’s ultimate savior came in the form of true freshman quarterback Tua Tagovailoa, who replaced sophomore Jalen Hurts after the latter only managed to complete three passes for 21 yards over the course of the first 30 minutes. The Tide commenced an aerial attack over the course of the next two quarters that was effective enough to send the game to overtime.

Alabama had to answer after the Bulldogs kicked a field goal to take the lead in OT, and it appeared Tagovailoa made a fatal mistake after getting sacked for a 16-yard loss on first down. He decided to make up for it by tossing a 41-yard touchdown on the next play to win the championship, ensuring he’ll go down in history like the Rudolph the Red-Nosed Reindeer of Tuscaloosa.

After the game, ESPN’s Tom Rinaldi tracked down hurts to ask him how he felt about being replaced, and he proved he was the ultimate teammate with his response.

Show this video to young athletes.#JalenHurts is all #Class #RollTide pic.twitter.com/zCXjko9ebd

There’s no telling who will take the reins next year, but based on the number of times “freshman” was mentioned during last night’s telecast, it doesn’t seem like Alabama will be going away anytime soon.