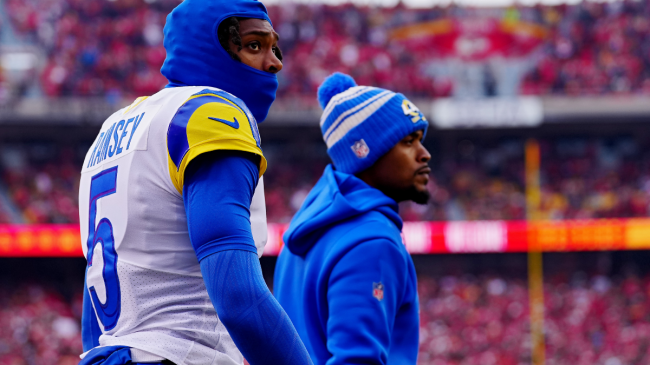 Fans are joking that Jalen Ramsey could be Kanye West’s next social media target after a viral video of the cornerback and Kim Kardashian began circulating Twitter.

Ye has seemingly gone off the deep end of late, making headlines for hate speech and obnoxious messages posted online. He’s been heard spewing antisemitic rhetoric while also putting folks on blast for having past relations with his ex-wife, Kim Kardashian. Those people include Pete Davidson and Chris Paul.

West has also taken recent shots at Elon Musk, leading to his Twitter account being suspended, and fans on social media believe he may have his next target in the crosshairs.

Before Los Angeles’s most recent matchup against the Seahawks, cornerback Jalen Ramsey was seen signing autographs and posing in pictures for Kim and her daughter, Saint. A clip of the interaction has now gone viral on Twitter, leading to a hilarious reaction from fans online.

Kim K and Saint getting autographs from Jalen Ramsey ✍️🌟

As usually happens in the social media world, the meet and greet has fans jumping to the quickest of conclusions that there obviously has to be some sort of interest in a relationship. And they don’t think Yeezy is going to be happy about seeing his ex in a now viral video with an NFL player.

One fan commented, “Kanye is about to take this s— out on all of us this week,” while another wrote, “Kanye fixing to throw a fit.” This fan posted, “Don’t let Ye see this!”

Those comments also warn Jalen Ramsey of acting on any impulses. The ‘Kim Kurse’ is alive and well. In fact, it might already be in the works with Los Angeles losing to the division rival Seahawks Sunday afternoon to fall to 3-9 on the year.