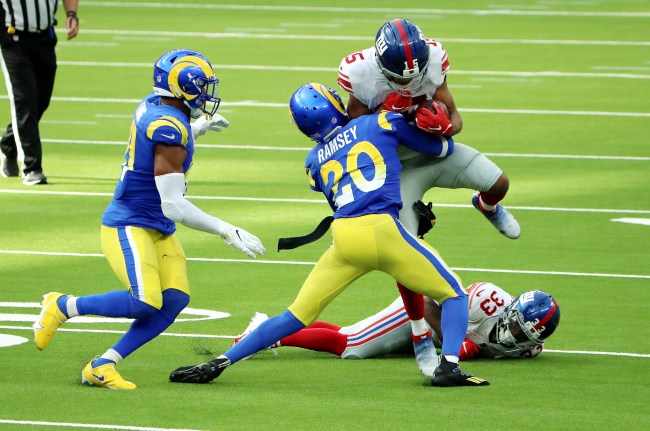 While the game itself was pretty pitiful, the Giants and Rams did deliver some pretty intense drama on Sunday when Jalen Ramsey and Golden Tate decided to fight one another at midfield after the game.

Tate and Ramsey have some history between one another with Ramsey actually being the father of two of Tate’s nieces. According to the New York Post, Ramsey ended his relationship with Tate’s sister, Breanna, during her pregnancy to date a Las Vegas stripper.

Tate is clearly not the biggest fan of Ramsey’s and he exchanged words with the Rams’ defensive back during the game on Sunday. Those words turned into action following the Giants’ 17-9 loss.

It was a giant scrum at midfield and viewers weren’t able to see much in terms of who may have thrown the first punch, but New York head coach Joe Judge says that Ramsey threw the first punch and that Tate was simply trying to defend himself in the situation.

“I talked to a number of our players and obviously we saw some video on and guys that were involved and I kind of had an eyewitness standpoint for myself after me and Sean had an exchange at midfield,” Judge told ESPN. “I turned around and it was kind of happening right there in front of me. So I got a quick glimpse of it right there.

It’s easy for Judge to come to the defense of his own player here, he’s obviously not going to throw Tate under the bus and say he threw a punch at all, let alone the first punch, but giving him the benefit of the doubt maybe he’s being genuine here. Then again, he doesn’t have anything to lose saying Ramsey is the one that threw the only punch, so who really knows what happened to start the entire melee.

As far as disciplinary action, ESPN said the league is looking into the situation but suspensions aren’t expected for either player.