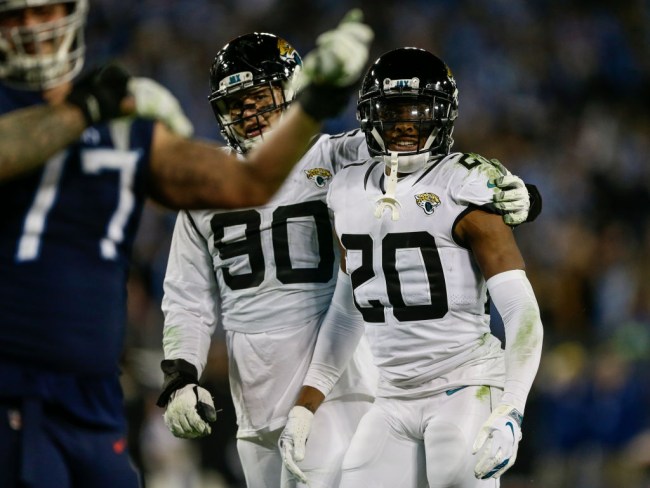 The Jacksonville Jaguars are devolving past a punchline and into pity territory after getting blasted on Thursday Night Football by the Titans, 30-9. Derrick Henry embarrassed the once formidable Jaguars defense, finishing with all four of the Titans touchdowns to go with a franchise-record 238 yards on only 17 carries. For perspective, before Thursday night game, Henry’s longest run of the season was only 16 yards.

After the game, famed motormouth Jalen Ramsey decided to pass the hat when asked about Henry’s historic rushing performance against a team defense that ranked second in the NFL last season. After saying bluntly, “we got our ass beat,” Ramsey followed with this:

“I mean, I had limited opportunities; they ran the ball,” Ramsey said. “They ran the ball down our throat 100 percent of the game. Personally, I didn’t have a lot of opportunities to make a game-changing play. I do what I can do and that’s all I can do, to be honest.”

Late in the game, Ramsey and Titans offensive tackle Taylor Lewan engaged in a little verbal sparring. Then Ramsey hit the deck in a flop that would make Chris Paul’s eyes roll in the back of his head. Ladies and gentlemen: the Jacksonville Jaguars 2018 season in one GIF.

Ramsey didn’t do himself any favors in the court of public opinion.

You: The Jags couldn't embarrass themselves anymore
Jalen Ramsey: Hold my beer pic.twitter.com/IE9RWpfcON

A flop from Jalen Ramsey that would make Vlade Divac proud pic.twitter.com/nmHWbHcL8y

Jalen Ramsey, the newest member of the USMNT. https://t.co/dNZOGQPUPs

The Jaguars fell to 4-9 and currently find themselves in the basement of the AFC South with just three games to go. What a fucking nightmare.