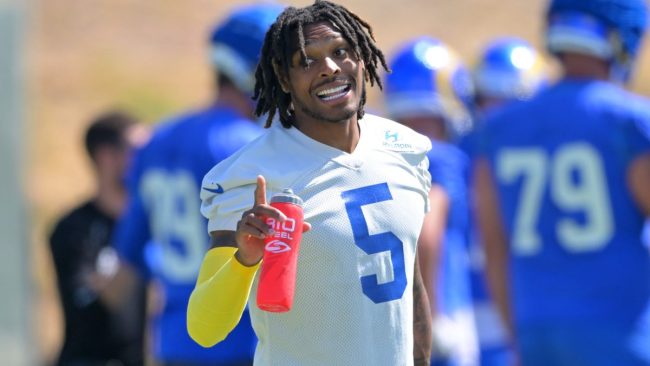 We’ve all seen hilarious videos of folks drugged up after leaving the hospital following some sort of surgery. A vast majority of them seem to come following things like wisdom tooth removal, and they show individuals speaking out of their minds as they try unsuccessfully to gather their bearings.

Most are far removed from reality, rambling on in nonsensical gibberish as their friends and family record in enjoyment.

We can now add a superstar NFL defensive back to this group.

Jalen Ramsey underwent offseason shoulder surgery this summer and earlier this week, he shared a video of himself shortly after the procedure. It’s comedy at its best.

The clip shows the Pro Bowler eating crackers from his hospital bed. He hilariously questions whether or not the nurses gave him Ritz or some knockoff brand.

After initially requesting to be discharged while still hooked up to the IV, Ramsey takes a look at the snack that the staff had placed in his lap.

“What are these? These ain’t no Ritz crackers.”

After being told that they were, in fact, a mix of Ritz and graham crackers, the cornerback digs in.

It’s hard to understand anything beyond that point, but it looks like he enjoyed them. Fans and coaches chimed in on the video shortly after it was posted.

Coach Eric Henderson replied, “Lmao,” to which Ramsey said, “Them meds was on DAWGWORK!”

Them meds was on DAWGWORK 😂

Rasmey says he has no recollection of the video, but he’s obviously getting a kick out of it now.

Completely 😂😂😂😂😂… don’t even remember this

Ramsey will hope to recover quickly from his surgery after battling through the injury last year. He looks to help the Rams defend their Super Bowl title.