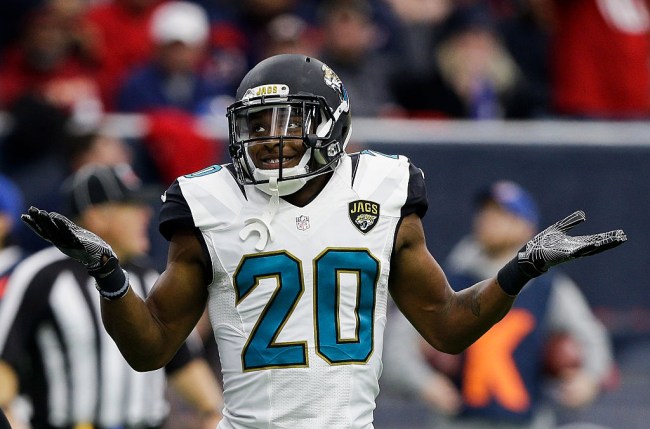 The Jacksonville Jaguars’ season didn’t exactly get off to the best start and no one was less pleased about how the team began the year than Jalen Ramsey, who got into it with head coach Doug Morrone in the first half of last week’s loss to the Texans.

You know things are getting crazy on an NFL sideline when the head coach has to be pulled back. Apparently, Jalen Ramsey already melting down and it's not even halftime #Jaguars #Texans pic.twitter.com/clU9UyICB8

As a result, it didn’t come as that much of a shock when we learned that Ramsey asked for a trade the very next day before airing his grievances at an incredibly bizarre press conference where he blasted the team for allegedly leaking the news to the media.

The cornerback—who previously expressed interest in playing for the Titans and the Raiders—followed up that performance a few days later when he appeared on a podcast shortly before the Jaguars game on Thursday night and ripped into the front office for disrespecting him.

Ramsey would ultimately play in that game without incident but has failed to change his tune as far as trade talks are concerned, and on Monday, we were treated to some new drama after we learned he wouldn’t be practicing at any point in the immediate future due to an illness.

Due to being sick, Jaguars’ CB Jalen Ramsey will not practice today, nor maybe this week at all, per sources.

Ramsey still wants to be traded; Jaguars want to keep him. Standoff continues.

Jaguars’ CB Jalen Ramsey thinks he has the flu, per source.

He’s sick alright…sick and tired of playing for the Jaguars!

Is there a chance that Ramsey is actually sick despite the fact that it isn’t flu season? Sure. Maybe. I guess.

With that said, when you consider the circumstances, this is about as good of a look as calling out of work the day after the Super Bowl and telling your boss you got “food poisoning.”