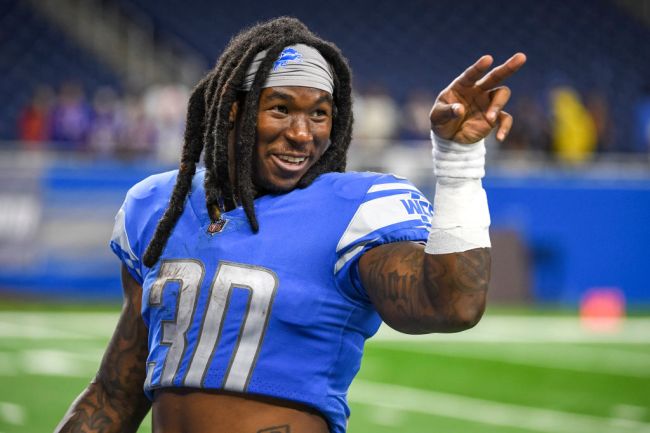 Jamaal Williams has big plans for his homecoming. Now a Detroit Lion, the 26-year-old running back spent the first four years of his career with the Green Bay Packers.

The two teams face one another in Week 2 on Monday Night Football this week. It will be the first time that Williams has played his former team since the Packers chose to go in a different direction after the 2020 season.

Although Green Bay ultimately decided to go in another direction, Williams is grateful for his time in Wisconsin and even more grateful for Detroit’s decision to pick him up. In four years with the Packers, he totaled 500 carries for 1,985 yards and 10 touchdowns.

Williams, who is a notoriously funny person, had a tremendous comparison for his change of teams.

“If I could’ve stayed, I could’ve stayed,” Williams said to the media on Thursday. “If I can’t, then they ain’t want me. Like that ex-girlfriend, I’ve gotta go. I’m happy I’ve got a rebound, named the Lions. They picked me up. Now they feeding me good, they taking me to dinner. One man’s trash is another man’s treasure.”

In his first week with the Lions, Williams made a statement. He amassed 110 total yards on nine carries and eight catches, and found the end zone in the fourth quarter.

His attitude could not be more positive.

“I get to do more (with Detroit) so I’m just excited,” Williams said. “I’m just grateful to be on this team. I’m grateful for my linemen, my receivers, anybody who blocks. Me and (D’Andre Swift) are really just having fun out there.”

After his hot start, he wants to keep things moving in the right direction against his former organization. Although he is no longer a Packer, he has full intentions of finding the end zone and celebrating like he would have if he was still playing in front of a home crowd at Lambeau Field.

“I still might Lambeau leap, I’ve been thinking about it,” he laughed. “I might just jump into some Lion fans.”

Obviously, Williams has to score first. However, if he does, and he does choose to Lambeau leap, it would be savage.

Packers fans don’t typically take kindly to opposing players jumping into the stands, but perhaps Williams’ history with the team will see him get a warm reception. To keep things simple, he might want to seek out the Lions fans before the game so he can ensure to be greeted with open arms.