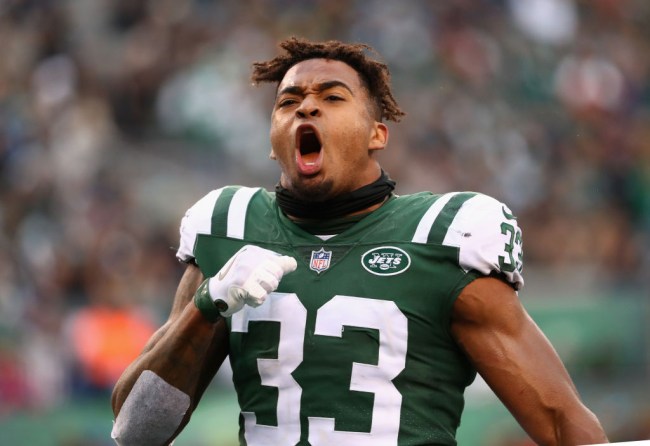 A couple of days ago, we learned Miami Dolphins LB Raekwon McMillan got a stern talking-to from a referee who told him “stay off” Tom Brady following what appeared to be a perfectly legal hit.

It’s not exactly a secret that the NFL wants to protect its quarterbacks—especially its marquee ones—but anyone who’s watched a game recently (including Brady himself) knows that the officials seem to be a little too liberal when it comes to throwing a flag when the passer is ever-so-slightly roughed up.

I get it—the NFL wants to put asses in the seats and get eyes on televisions sets and it’s hard to do that when you have the likes of Mason Rudolph and David Fales starting games in the pocket due to injuries.

However, it’s safe to say the league is taking things a bit too far.

On Wednesday, disgruntled Jets safety Jamal Adams tore into the NFL for fining him $21,000 after he was penalized for what appeared to be a clean hit on Baker Mayfield.

This league is a damn joke! I just got fined $21k for this hit, I signed up to play football not two hand touch. Bullshit! I don’t give a damn about these soft rules protecting QBs. Im gonna play MY brand of football everytime I step on the field. SMH pic.twitter.com/SKlTmBBMf0

On Thursday, Adams spoke with the press and revealed he’d been scolded by his mom for labeling the fine “bullshit” instead of opting for something a little less profane.

"My mother told me to calm down, she was upset with me that I was cursing last night on social media" – @TheAdamsEra pic.twitter.com/fO4JfGPMdn

Of course, his mom wasn’t the one who was docked $21,000 and I think the average person would agree “bullshit” is a pretty good way to sum up Adams’ situation.

Maybe he should have gone with “bullcrap” instead.