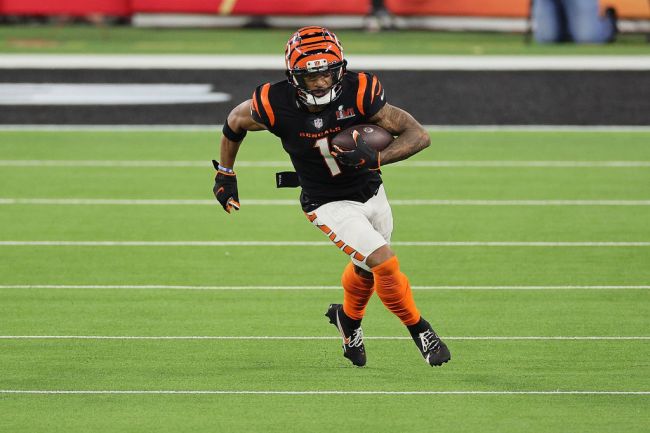 When the Cincinnati Bengals drafted Ja’Marr Chase 5th overall last year, there were some that questioned the decision to draft a receiver rather than an offensive lineman. It didn’t take long for Chase to show those individuals exactly why he was the right choice.

Chase immediately rekindled his rapport with Joe Burrow, who he had played alongside in college as part of one of the best offenses college football has ever seen. Chase caught 81 passes for 1455 yards and 13 touchdowns in his first season in the NFL, breaking the rookie record for receiving yards.

That record was previously held by another member of the LSU team that Chase and Burrow won a national championship with. Justin Jefferson had broken the record during the previous season, when he had 1400 receiving yards as a rookie.

Their shared alma mater and impressive starts to their careers has inevitably led to plenty of comparisons between Chase and Jefferson. Today, CBS Sports’ Pete Prisco asked Chase about those comparisons and Chase revealed that he believes he is actually the better receiver of the two.

"Imma say me of course…he stole all my moves." @Bengals WR Ja'Marr Chase on who the better receiver is between him and Justin Jefferson 👀

The possibility of Ja’Marr Chase being the better of the two LSU receivers should be a terrifying thing for opposing defenses to think about.

Jefferson followed up his impressive rookie season with 108 catches for 1616 yards and 10 touchdowns. If Chase is truly the better receiver, the sky could be the limit for him in year 2, especially when he benefits from being thrown to by Joe Burrow instead of Kirk Cousins.

If Chase is right about about his talents, we could be talking about him in the conversation of best receivers in football by the end of this coming season.