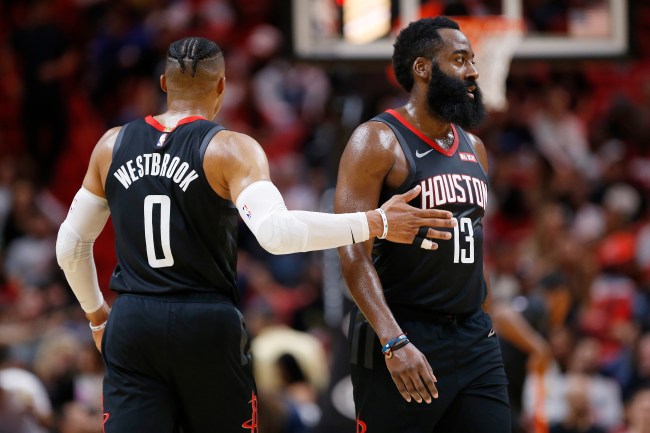 Russell Westbrook and James Harden already bickering in the honeymoon stage. How do we feel about this guys? I guess there’s two ways to interpret it.

A.) These guys have known each other their entire careers and it should be reassuring to Rockets fans that they are able to meet their differences when they arise. This is the most likely case.

B.) They hate each other. Every play James Harden makes that doesn’t involve Russ is a personal insult to him and vice versa. I give them 10 games before there is an on-court homicide. Highly unlikely, but this is the internet. We relish in the ‘what ifs.’

After the Rockets 117-111 home loss to the Bucks, in which Houston blew a 16-point halftime lead, Russell was asked about the animated exchange. He had this to say:

“The animation is because we talking about something. But don’t dive too much into it. Like I told you, there’s nothing that nobody around the world, media, anybody that can get in between what we have, because we’ve had it for so long. So the more you keep asking, the more it ain’t going to work.”

That’s certainly not what NBA Twitter wanted to hear. They thirst for drama.

Westbrook: “PASS IT TO THE BRODIE!”

Harden: “See, you’re supposed to pass me the ball. Only me.”

Westbrook: “That’s what I just said to you.”

“Harden and Westbrook are each 1 assist away from a triple-double!” #NBATwitter pic.twitter.com/BYJ4I67ONe

Westbrook “this mf think he finna out triple dub me , must be smoking “

Harden “I know you ain’t whispering under your breath, I bet I send yo ass back to OKC”

Westbrook and Harden discussing who should get to shoot 40 times pic.twitter.com/n8n4ebxFYL

James Harden: “Pass Me The Ball On The Next Play Bro”

Harden to Westbrook after the first midrange pullup pic.twitter.com/uwH1Tnsem7

Hold up, ladies and gentleman. False alarm. The king has spoken.

I still believe Harden+Westbrook will work and that the Rockets will make it to the conference finals.