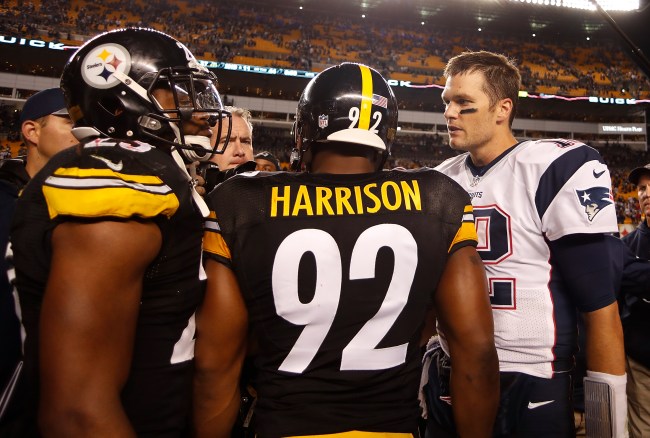 For many Steelers fans, James Harrison died when he joined the New England Patriots last year midway through the season after voicing his dismay with a lack of playing time.

That collective bitter taste extended to Harrison’s former teammates as well–Maurkice Pouncey went on the record to say that the 39-year-old Harrison ‘ruined his Steelers legacy.’ Steelers linebacker Bud Dupree claims Harrison often did not practice, attend team meetings, or even enter the locker room.

The Steelers cut the two-time Super Bowl winner and the franchise’s all-time sack leader for a bag of peanuts and it appears the 40-year-old has no interest in protecting his legacy in Pittsburgh.

Harrison appeared on The Herd with Colin Cowherd and further twisted the knife by claiming the Patriots coaching staff was superior to Mike Tomlin and the Steelers staff.

“The only thing that’s really opposite is that in New England, it’s more regimented, it’s more disciplined,” said Harrison. “The coaching is better, to be honest with you. The plans they put together are better. And they don’t ask their players to do anything that’s outside of the realm of what they feel their capabilities are. So when you do that, and you switch a lot of players in and out for certain things that you want to get accomplished, you get things done and that’s what they have over there.

“I wanted to hate [Tom Brady] so bad, playing against him all those years and him getting the better of us for the most part of them, I wanted to hate him … I feel like [the Steelers system] needs to be more disciplined…”

"It's more regimented. It's more disciplined. The [Patriots] coaching is better to be honest with you. The plans they put together are better."@jharrison9292 on the differences between the Patriots and Steelers pic.twitter.com/bGW2Ej7uYa

James Harrison officially announced his retirement at the end of last season after 15 years in the NFL.