Flyers’ James van Riemsdyk Had The Ultimate Hockey Guy Sequence Against The Rangers, Which Included Scoring A Goal With His Face 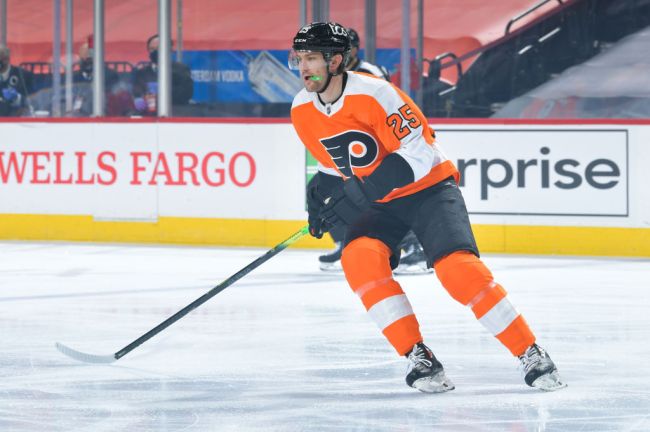 Hockey guys are different. It’s been said one million times, but there’s a reason that the phrase is used so much, it’s because they’re constantly doing unthinkable things while running around with blades attached to the bottom of their feet and a stick in their hands playing with a puck that’s as hard as an actual brick.

Speaking of pucks, Flyers’ forward James van Riemsdyk got acquainted with one in a brutal way on Thursday night against the Rangers. During a power-play opportunity in the second period, Travis Konecny fired a shot toward the net, which deflected off the stick of a defender to find van Riemsdyk’s face before finding the back of the net.

In typical hockey player fashion, the puck to the face didn’t phase JVR all that much. After scoring the goal, he did fall to the ice for a bit before going for a quick check in the dressing room but returned to the bench shortly after with a jaw shield attached to his helmet.

Then, shortly after returning to the ice, van Riemsdyk scored his second goal of the night. It was another deflection goal, but instead of using his face this time around, he decided to use the twig in his hands.

scores a goal off his face.

comes back and scores one off his stick. pic.twitter.com/95Ly4oVdgP

What an unbelievable hockey guy sequence. Scoring a goal using your face and later returning to score yet again as if nothing ever happened.

Earlier this month it was P.K. Subban getting sliced by a skate, getting stitched up, and hardly missing a shift and now we’ve got van Riemsdyk scoring goals with his face.