P.K. Subban Shows Off The Gory Leg Injury He Somehow Played Through After Being Slashed By A Skate 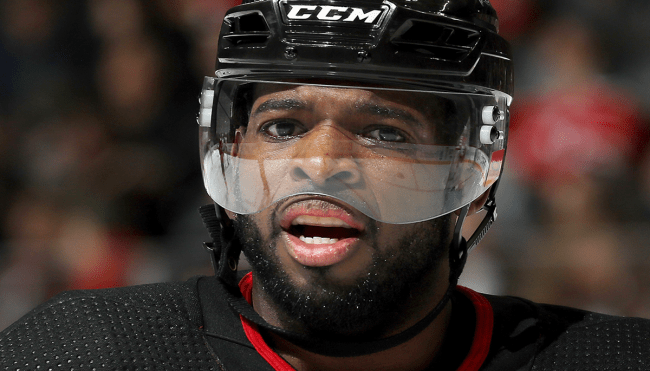 When I was in high school, my junior varsity golf team suffered a truly devastating blow when I was forced to withdraw from a match after managing to twist my ankle during one of my regular forays into the woods in search of a ball I shanked into the trees.

As a result, it’s safe to say I lack the physical fortitude possessed by the many athletes who’ve kept doing their jobs after suffering infinitely more serious injuries. That includes the many hockey players who’ve managed to play through some absolutely debilitating pain, like the time Bruins forward Greg Campell had his leg broken after getting drilled by a puck during a power play and somehow managed to finish out his shift before hobbling back to the bench on one skate.

During Sunday night’s game against the Penguins, Devils defenseman P.K. Subban became the latest NHL player who refused to be sidelined after succumbing to the kind of injury that would make the average person pass out if they suffered the same kind of damage he did after getting slashed by a skate at some point during New Jersey’s 5-2 loss to Pittsburgh.

On Monday, Subban hopped on Twitter to show off a picture of the gory war wound he somehow got stitched up in the locker room without missing a single shift, and if you’ve recently consumed any food, I would suggest thinking twice about continuing to scroll.

I’m not being hyperbolic.

Seriously, this is your last chance.

Subban not only managed to hop back onto the ice but would go on to take matters into his own hands when he stormed into the offensive zone before netting a controversial goal to bring the Devils within two around the midpoint of the third period.