James Worthy Yells At Clouds, Says All Modern NBA Players Do Is Practice Threes And Tweet 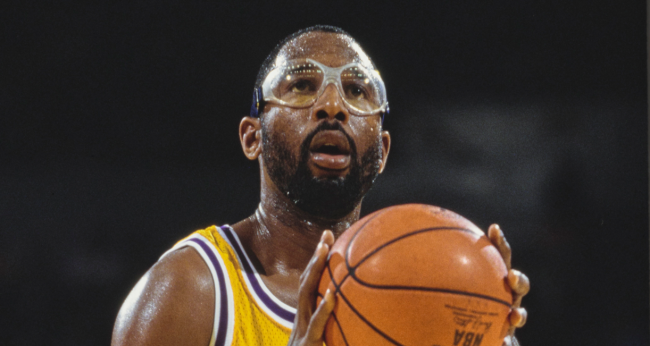 Los Angeles Lakers legend James Worthy has seen a thing or two when it comes to basketball. He won an NCAA championship, was named the tournament’s Most Outstanding Player, was the first overall pick of the 1982 NBA draft, won three NBA championships, voted Finals MVP, and is a Hall of Famer.

He also accomplished all of that between the years 1979 and 1994. So he’s definitely what you would call “old school” at this point.

In fact, James Worthy is so old school that he has some issues with the modern NBA game and its players.

During an interview on Wednesday with the Stoney & Jansen Show, Worthy said, “I mean, Kareem had four years with John Wooden, Michael Jordan and I had three years with Dean Smith, Isiah (Thomas) had some years with Bobby Knight. So you learned the fundamentals.

“Not only that, you learned how to live. You learned how to balance your freaking checkbook in college, there’s a lot of things. When you don’t get that, guys are coming to the NBA who are not fundamentally sound. All they do is practice threes, lift weights, get tattoos, tweet and go on social media. That’s it.”

NBA fans, and one current player, had thoughts on James Worthy’s comments

“So you don’t have that sound player; you have an athletic player. And that’s what’s happening to the game. It’s a lot of ISO and looking for mismatches. Bill Russell told me one time, they had five options off of one play. You don’t see that anymore.”

Worthy’s comments got the attention of many NBA fans, plus one current NBA player who actually kind of agreed with him: Kevin Durant.

My middy is sharp, but james is right, this ain’t the old days lol https://t.co/MbHHTPSsQn

Jordan Clarkson (a role player) would take prime James Worthy’s ankles. The standard for being a professional basketball player was significantly lower back then 🤡