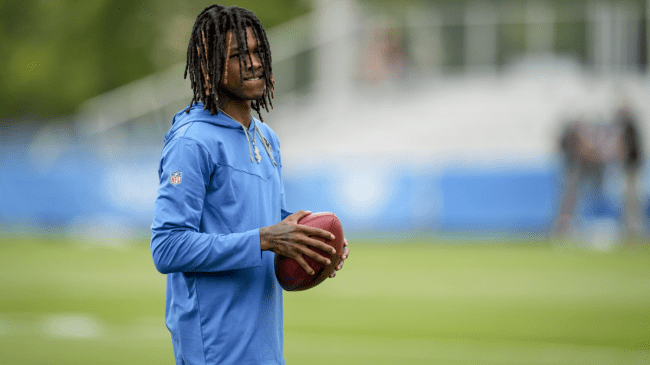 Jameson Williams is looking to make an impact in his rookie season with the Detroit Lions. The first-year player out of Alabama was selected with the 12th overall pick in the latest NFL Draft.

Unfortunately, a serious knee injury has postponed his professional debut, but it’s likely that the pass catcher will be able to return sometime this year. Despite the setback, the Lions are excited about his future with the organization.

But fans are now speculating how long that stint in Detroit will last.

Williams posted a video of himself driving to the Lions’ training facility. Many don’t think he’ll be able to handle the cold after seeing him bundled up in winter gear following the first sign of fall.

Playing in the SEC certainly didn’t prepare the pass catcher for life in the NFC North, where he’ll play yearly in Lambeau Field, US Bank Stadium, and Soldier Field. A pair of those venues are famed for playing on the frozen tundra, where Williams will likely need more than a puffer jacket to keep warm.

At least the Lions play in a dome.

One fan says Nick Saban needs to “schedule some late season games with the B1G” in order to prepare his players for the next level. The Crimson Tide rarely venture up north for out-of-conference play.

Someone needs to tell Saban to schedule some late-season games with the B1G to get those guys ready for this https://t.co/dsUbGCPmUG

Another Twitter user posted, “He will love playing in Green Bay and Chicago in December.”

He will love playing in Green Bay and Chicago in December.

This person tweeted, “This dude is in for a rude awakening when the winter hits.”

Some are choosing to look on the bright side, though. Like this fan, who wrote, “He’s so fast it’s already winter for him.”

He’s so fast it’s already winter for him.

All jokes aside, it will be great to finally see Williams on the field in Detroit. Here’s to a speedy recovery for the youngster.