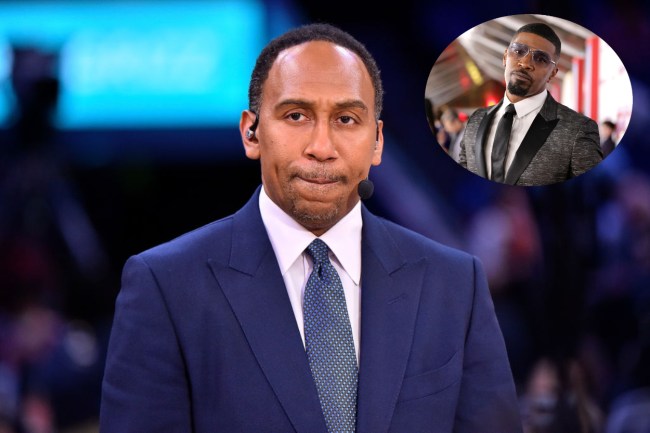 Stephen A. Smith, like many other analysts and media members, has been incredibly critical of Ben Simmons. When Simmons decided to sit out the Nets’ must-win Game 4 against the Celtics, that was the last straw for Smith.

Smith went on to eviscerate Simmons during Monday’s edition of ‘First Take’ and his comments did not sit well with Jamie Foxx.

Simmons did not play a single minute this season citing mental health troubles and back problems. Smith explained during Monday’s show that Simmons could be “the weakest, most pathetic excuse for a professional athlete we’ve ever seen in not just American history, but the history of sport.”

Jamie Foxx Brings Race Into Argument With Stephen A. Smith

Foxx responded to Smith’s harsh words in a since-deleted video. The Academy Award winner explained why he thought Smith’s criticism was “unfair” before insinuating that Smith never speaks like that about white athletes.

“That is completely unfair,” Foxx said of Smith’s criticisms of Simmons, according to the New York Post. “Ben Simmons has a family. This man has people that love him and this man just plays basketball but to be dragged through the mud like this is unfair.”

“And why is it you only go at basketball players … you [are] completely mute when it comes to the Tom Bradys [and] the Aaron Rodgers of the world … You get where I’m going … stop it, bruh, it’s out of bounds.”

He brought up both Tim Tebow and Steve Nash as “countless examples” of the white athletes he called out before clearing the air about the Foxx situation. Smith was also extremely critical of Aaron Rodgers last season, torching him on ‘First Take’ on multiple occasions.

“Jamie Foxx knows better,” Smith explained. “He’s just highly protective of the black athlete, as he should be, because they deserve our protection in a lot of situations.

“Jamie Foxx knows good and damn well it ain’t got nothing to do with brotherhood for me. I protect brothers all the damn time, trust you me, it’s what I don’t say that proves my protection.”

Smith is paid extremely well to be critical of athletes on TV every single day. Perhaps Foxx realized that, hence his deletion of the video. However, if we’ve learned one thing over the years if you say something about Stephen A. he’s going to address it one way or another.