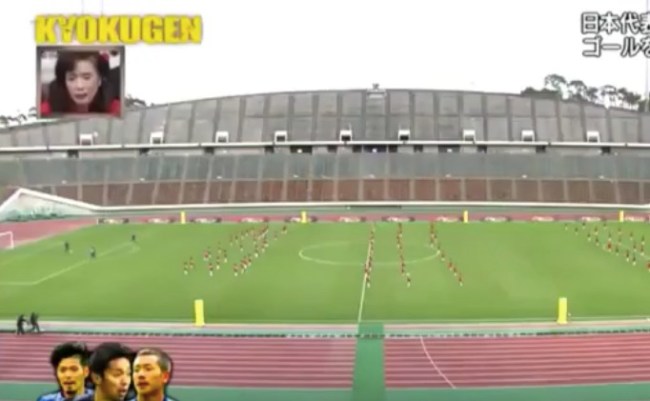 Japanese TV programming has been straight up crushing TV shows in America for as long as I can remember. I spent a great deal of my adolescence watching MXC (Most Extreme Elimination Challenge) on Spike as people pushed their pain thresholds to the maximum. For some reason, the Japanese culture has a master’s understanding of reality TV while here in America were stuck with shit ass TV like Keeping up With the Kardashians and TV shows about hoarders.

This clip below is just the latest example of Japanese superiority. In this clip, 3 (adult) professional soccer players from Japan take on 100 Japanese school children. The kids are divided up into three groups of 30 and one group of 10 (30-30-30-10). You’d think that based on numbers alone the kids could swarm the pros but you’d be wrong…kind of. I don’t want to give away everything in the clip so I’ll let you bros do the watching:

1) Kind of shows how useless kids are, doesn’t it?

2) This makes me wish you could pay for this experience in Las Vegas. I’m no pro. Maybe with this number cut in half, it would be adjusted for average people like myself and my friends. Either way, this definitely seems like something that adults with fat bank accounts should be able to set up with enough money, right? Surely there are some parents reading this who would be willing to sign their kids up to lose at a game of soccer to some adults if it meant their kids would get paid fo ran afternoon of fun.