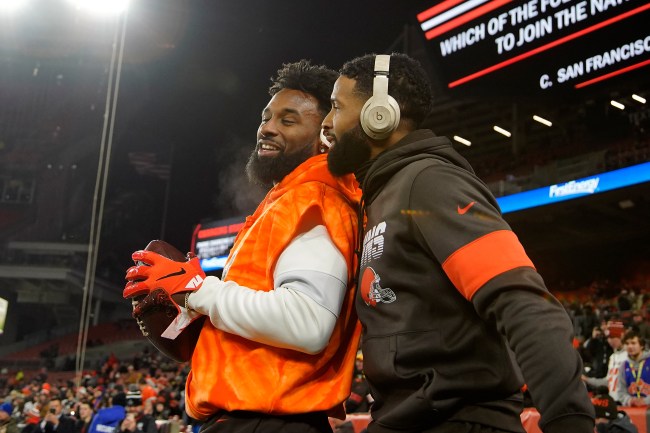 Jarvis Landry and Odell Beckham Jr. have been best friends since their college days at LSU, and, when the two reunited as teammates on the Cleveland Browns this past offseason, magic was supposed to happen on the field. Given both wideouts are Pro Bowlers, the Browns were trendy picks to compete for a Super Bowl, and everyone assumed the offense would be unstoppable.

Unfortunately, things haven’t worked out that way in Cleveland, as the Brownies find themselves at 6-7, and barely hanging on to the slimmest of playoff hopes. And, as bad as things have been on the field, recent reports suggest that Odell Beckham Jr. has been hinting at wanting out of Cleveland, with FOX’s Jay Glazer even saying the mercurial wide receiver has asked opposing players and coaches to “come get him” this offseason.

While everyone’s talking about the (potentially) inevitability of OBJ leaving Cleveland after just one season, Jarvis Landry is trying his best to kill the rumors. That’s because Landry said the other day that any report about Beckham wanting out is far from the truth, and that OBJ wants to stay with the Browns. Here’s what Landry had to say when asked about the reports, per Cleveland 19.

“I think he wants to be here, I know he wants to be here. It’s not even about trying to go somewhere else, for him,” Landry said Thursday. “He’s been a leader. He’s a guy that comes to work every day. He’s a guy that’s played through injuries. All of the things you want out of a player. Inside this organization he has a voice, he has a responsibility to himself to all of us to go out there and compete each and every Sunday. And he does that. So he doesn’t want to leave and he’s not trying to leave.”

Now, whether or not Jarvis Landry knows anything about anything regarding Odell Beckham Jr, we don’t know for sure. But the fact that the two are best friends sort of gives us an idea that he probably does.

While OBJ has fought a sports hernia all season long — one that quarterback Baker Mayfield said was mishandled by the team’s training staff — he’s still on pace for over 1,000 yards receiving for the fifth time in six years. But his impact has been very un-Odell like, which is why reports of him wanting out of Cleveland have surfaced.

As for Jarvis Landry, when he was asked again if his best friend wants out, he emphatically doubled down, and said he’d “beat his ass” if Beckham Jr. didn’t talk to him prior to demanding a trade, if it ever reached that point.

“He doesn’t want to leave, and he’s not trying to leave,” Landry reiterated.

Landry was asked if Beckham would confide in him, if he did want to leave.

So, there you have it; Odell Beckham trade rumors are nothing but total BS — according to Jarvis Landry.