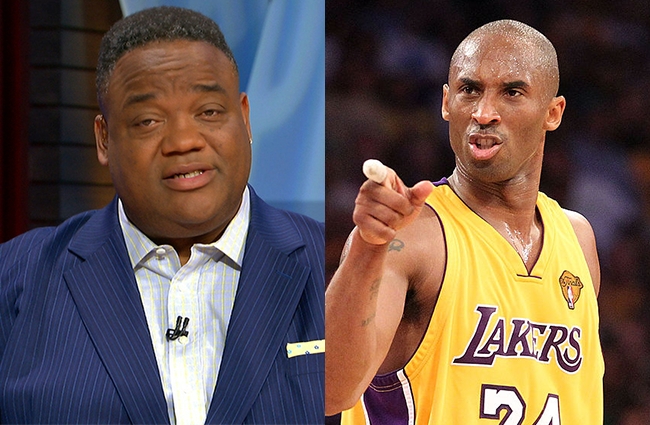 The sudden passing of Kobe Bryant and eight other people (including his daughter Gianna) in a helicopter crash on Sunday sent shockwaves through the basketball world and beyond as fans and players attempted to process the shocking death of an NBA legend.

Over the past week, there’s been an outpouring of tributes to the fallen superstar from the many people he impacted during his 41 years on the planet. We’ve heard some awesome stories from those who played with him, anecdotes concerning his compassion for others, and seen some amazing gestures from the people around the world who have memorialized him in a number of ways.

Plenty of reporters in the sports media world have also reflected on the legacy Kobe left behind and it’s hard to watch Elle Duncan recount her story about their first meeting or Jalen Rose and Jay Williams look back at his life without experiencing some serious emotional flare-up.

Earlier this week, Jason Whitlock also took a moment to remember Bryant on Speak For Yourself. It’s not exactly a secret that the reporter wasn’t a huge fan of Kobe during his career and he acknowledged about as much, but during the segment, he said his views changed a bit after having a conversation with the former Laker in 2014 concerning his long-term vision to help shape younger generations.

Whitlock seemed genuinely saddened, but as Total Pro Sports notes, that didn’t stop plenty of people from calling out the talking head for suddenly changing his tune on Kobe, with many of them posting images of an impressively callous open letter he wrote for ESPN in 2004 in which he took aim at his wife Vanessa.

Do people change? Absolutely. I’ve been writing on the internet for a decade and there’s some incredibly dumb shit I said early on in my career that I wouldn’t even attempt to defend now.

However, it’s hard to sympathize too much with Whitlock here based on his long and storied history of attacking Kobe at almost every turn. They may have had a heartfelt discussion in 2014 but that sure as shit didn’t stop the reporter from continuing to gleefully rip into him on multiple occasions after that.

In 2016, Whitlock celebrated Bryant’s final game in the NBA on The Herd by accusing Bryant of destroying the Lakers franchise that won five championships while he was there.

A few days later, he followed up that performance by labeling him “the most fraudulent superstar” to ever play the game.

Want more? You got it!

While Whitlock claimed this week that he’d recently finally started to appreciate the good things Bryant was trying to do in his retirement, this video of him accusing Kobe of being a fake for making an effort to become a nicer guy isn’t the best look.

In response to the backlash, Whitlock decided the best course of action was to defend the atrocious column he’s caught heat for and to suggest the reason he’s being criticized is because someone “bought an algorithm,” which is something only someone with a very firm understanding of how the internet works would say.

It took you more than a decade to figure it out? There was no backlash to the piece when I wrote it. All of this phony outrage is just that, phony outrage. The column was sarcasm a decade ago and it remains that today. Don't get caught up in the phony shit. https://t.co/5C27Fd9ezb

Twitter is rigged. Algorithms crafted in Silicon Valley to control the conversation and who is considered an "influencer." The show we did on Monday about Kobe was too good. Someone bought an algorithm on Wednesday to create the impression of Kobe blowback. It is what it is. https://t.co/qZflzdrFQ9

As a result, I’ve decided to write an open letter of my own:

Hey, buddy. How ya doing? My name is Connor. I’m a 29-year-old sports fan and I write semi-entertaining things online. We’ve never formally met; and, to be quite honest, I’ve never really liked you.

Hey, let me get to the reason I’m writing: to tell you to take the L and move on.

I know there’s a chance Whitlock might buy an algorithm himself that results in me having to deal with a firestorm of angry tweets but that’s a risk I’m willing to take.