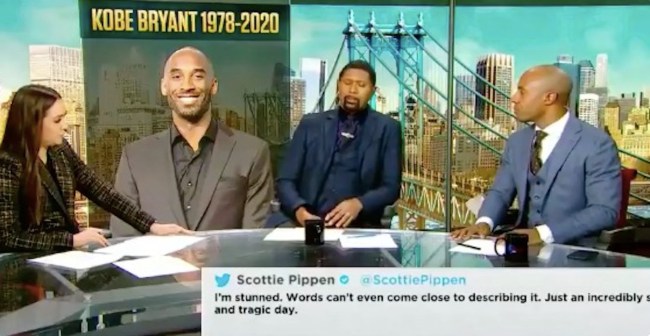 Prior to the beginning of tonight’s inexplicably still-on Celtics-Pelicans game, ESPN NBA analysts Jalen Rose and Jay Williams opened NBA Countdown with a moving and thoughtful eulogy about Kobe Bryant, who passed away today in a Calabasas helicopter crash at the age of 41-years-old.

Williams — who became emotional on ESPN when reporting on the tragedy earlier in the day, closed his statement by saying that — despite the fact he could lose his job for such comments, that he disagrees with the NBA’s decision and thinks all games today should be canceled as the basketball world processes this horrific news.

Jalen Rose and Jay Williams eulogize Kobe Bryant on the opening of NBA Countdown, with Williams — who acknowledges that he could lose his job — saying that he says he disagrees with the NBA and thinks games should be canceled.pic.twitter.com/WImfSi3J0K

Bryant, just 41-years-old, passed away in a helicopter crash in Calabasas, California, on Sunday, January 26. Bryant was one of nine victims in the crash. One of the other victims was Bryant’s 13-year-old daughter Gianna Marie Bryant. At the time of this writing, the seven other victims in the crash have yet to be identified, although reports indicate that another member of Gianna Marie’s basketball team and a parent were aboard the helicopter.

Following the shocking news of the death of basketball legend Kobe Bryant, tributes from all corners of the globe from people of all different walks of life began pouring out. Various NBBA stars and athletes took to Twitter to pay tribute to the late Hall of Famer, who retired in 2016.