Jason Whitlock Believes LeBron James, Colin Kaepernick’s Embrace Of ‘Anti-American Sentiment’ Is To Appeal To China On Behalf Of Nike 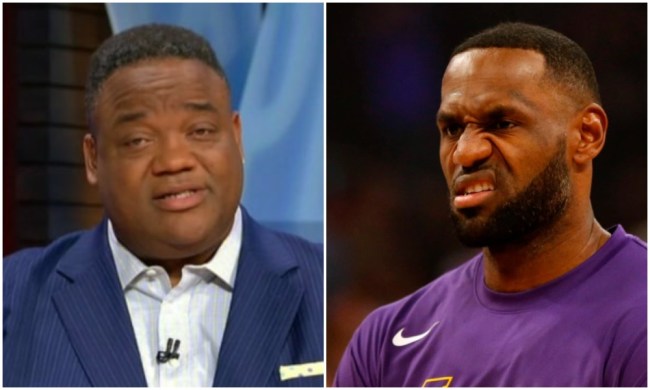 Jason Whitlock has always spoken his truth. No matter how controversial the topic at hand may be or if his opinion pisses off half of the Internet, he’s always told it like he’s seen it.

Over the last couple of years, social justice in sports and China’s influence on America in general have been among Whitlock’s most talked and written about topics. While plenty of sportswriters and analysts have merged sports and politics together in one direction, Whitlock has gone the other way. His opinions don’t particularly align with the conversations that dominate Twitter and Facebook.

Whitlock recently joined ‘The Truth with Lisa Boothe‘ to offer his opinion as to why so many professional athletes in America are embracing “an anti-American sentiment” in their public stance and social-justice messaging. He singled out LeBron James, Serena Williams, and Colin Kapernick in particular as all three are Nike athletes appealing to China, in his eyes.

“All of our corporations want to improve their relationships with China. And so in the sports world, there’s nothing more powerful than Nike. It’s a 40 to $50 billion company. It’s bigger, more financially relevant and stronger than the NFL and the NBA combined,” Whitlock said, according to Mediaite.

“That’s why LeBron James, Colin Kaepernick, even Serena Williams, there are other spokesmen, they’ve embraced an anti-American sentiment in their public stances,” Whitlock told Boothe. “Because this improves their relationship with China. And this is why they’re so fearful of ever speaking out against anything that goes on in China.”

Kaepernick, Williams, and James are undoubtedly three of the most influential people, not just athletes, in the United States. All three have certainly made their stances clear on the social justice issues they want to address with the public, particularly police brutality and racism in America.

James, Williams, and Kaepernick have been silent about any of the many issues taking place in China, and Whitlock is pointing his finger at Nike and the paychecks they cut these athletes as to why they’ve been so hush-hush about what’s taking place on the other side of the world. Nike may be based out of Oregon, but they certainly have major ties with China.