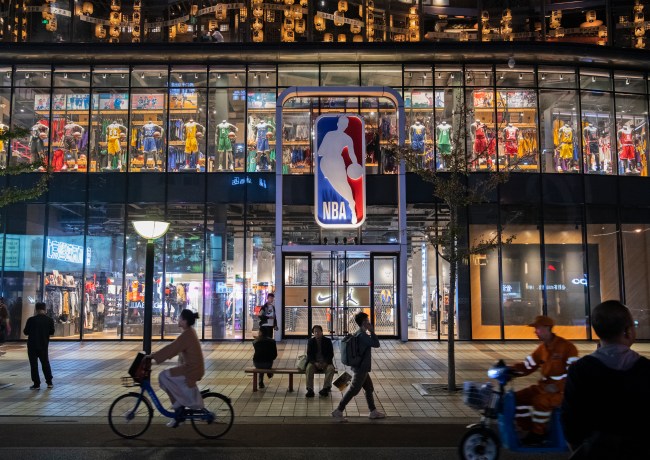 On Wednesday, ESPN released an explosive report regarding the NBA’s training academies in China in which several American coaches have come forward to say that Chinese coaches at certain camps were “physically abusing young players and failing to provide schooling.”

One of the camps was located in Xinjiang, a police state in western China where more than a million Uighur Muslims are now held in barbed-wire camps. NBA commissioner Adam Silver has recently stated that the camp in Xinjiang had been shut down over a year ago. According to the report, American coaches were harassed and surveilled in Xinjiang and one American coach was detained three times without cause.

One former league employee even compared the atmosphere when he worked in Xinjiang to “World War II Germany.” Another American coach who worked for the NBA in China described the project as a “sweat camp for athletes.”

Among the many accusations laid out in the report, one American coach describes an incident where a Chinese coach kicked a player in the gut and fired a ball directly at his face.

This particular investigation conducted by ESPN began after Houston Rockets GM Daryl Morey tweeted ‘Fight for Freedom. Stand with Hong Kong’ expressing his support of pro-democracy protests surrounding an extradition bill introduced in April. The Chinese government reacted by bullying the NBA, canceling all press conferences, and blacked out television broadcasts around the country of the preseason games.

Both the league and the face of the NBA, LeBron James, reacted to China essentially telling them to shut up and dribble by literally shutting up and dribbling.

Related: Hong Kong Activist Calls Out LeBron James For Hypocrisy: ‘All He Cares About Is Money, Not Human Rights’

The NBA looked horrible back in October when the Morey situation occurred and now it looks much, much worse after this bombshell report.

One might imagine that somebody in the league’s offices, Silver, James, or literally any other player would finally step up and speak out about the situation in China, but that hasn’t been the case.

NBA chief operating officer Mark Tatum, who oversees international operations, was interviewed during as part of ESPN’s investigation and instead of ridiculing China, coaches allegedly abusing players, or the fact the NBA had a camp in Xinjiang, he had the gall to decline to say whether human rights were a factor in the closing of the camp. Instead, he described the situation as humbling.

“We were somewhat humbled,” Tatum said of the academy project in China. “One of the lessons that we’ve learned here is that we do need to have more direct oversight and the ability to make staffing changes when appropriate.”

Until the NBA actually comes out and addresses the situation in China – don’t get your hopes up – it’s impossible not to look at the league and not see this as nothing more than a money grab as it expands its brand in the country.

Money talks, it’s whispering in the NBA’s ear, and the league is listening loud and clear despite a disastrous situation unfolding under its own name.