Jason Witten Is Being Dragged For Comparing Saquon Barkley To O.J. Simpson On ‘MNF’ 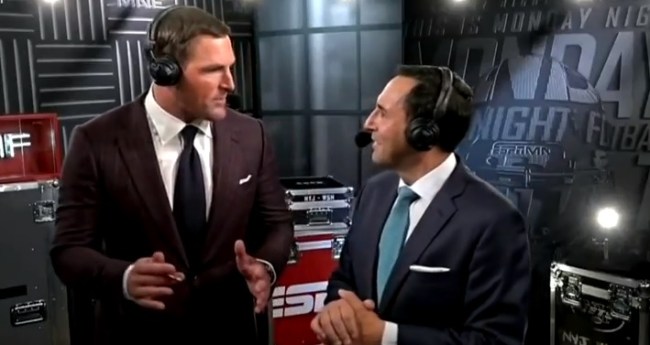 I wonder what percentage of the younger generation knows O.J. Simpson as the murderer guy and has no idea he was one of the best running backs of all-time. As a refresher: Simpson became the first NFL player to rush for more than 2,000 yards in a season. He holds the record for the single season yards-per-game average, which still stands at 143.1. AND, he is the only player to ever rush for over 2,000 yards in the 14-game regular season NFL format.

Just as it’s taboo to now recite a Bill Cosby joke, it’s an unspoken rule that Simpson’s on-the-field accolades should be avoided at all costs.

Jason Witten doesn’t play by your rules. The Cowboys great and first-year broadcaster has been less than polished through the first eight games of the season, by saying things like the soft roughing the passer rule is too “left wing” and using incorrect cliches like “pulling a rabbit out of his head.”

Last night on Monday Night Football, Witten came under fire once again for comparing Giants running back Saquon Barkley to the most infamous athlete of all-time.

‘Think of all the great running backs – and I would certainly put Barkley in there – that never got to a Super Bowl: O.J. Simpson, Eric Dickerson, LaDainian Tomlinson,’ Witten said. ‘They never got an opportunity.’

Out of all the running backs Jason Witten could of compared Saquon Barkley to, the first name out of his mouth was OJ Simpson 😂😂😂

OJ Simpson! Finally someone is giving him the much needed respect. Thank you Jason Witten. pic.twitter.com/lxz2knBvPO

I can’t wait for Witten to namedrop Aaron Hernandez when referring to Travis Kelce in Week 10. Hey, football is football.