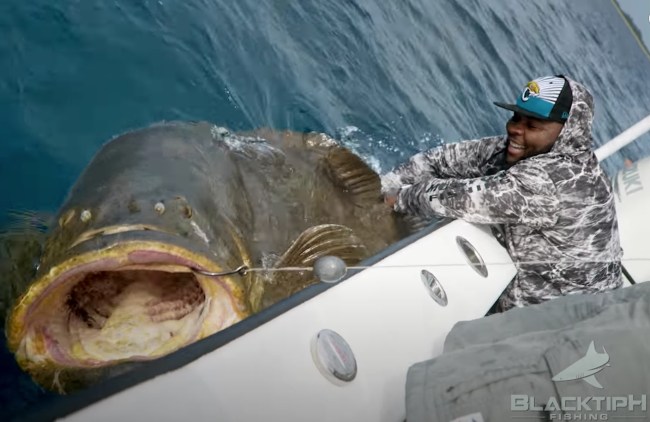 A 320-pound professional athlete shouldn’t have any problems fighting a big ol’ fish, right? Wrong. This 400-pound Goliath Grouper has the rod doubled over on the side of the boat and the 2019 PFWA All-Rookie Team
was fighting like he was in the Sunday trenches to get that fish in the boat.

Taylor was out fishing with his agent, Drew Rosenhaus, and Josh Jorgensen from BlacktipH Fishing on YouTube. They started by targeting some snook and both Jawaan and Drew managed to reel in personal best snook before dropping a bonito for goliath grouper, a protected species in Florida that really has no natural predators and is able to grow up to the size of a grizzly bear. He’s also using stand-up tackle here versus a fighting chair which means he has to use all of that muscle in his back and legs to bring up this 400-Pound fish from the depths or risk going overboard.

Goliath Grouper are some of the biggest fish you’ll find in saltwater. The IGFA all-tackle world record for Goliath Grouper was a 680-pound fish caught in Fernandina Beach, Florida all the way back in 1961. And that record hasn’t ever been broken in America because these fish are a protected species and anglers can’t keep them.

Oddly enough, I’ve never caught a Goliath Grouper over 200-pounds despite seeing these 500+ pounders my entire life. You even see them in relatively shallow water sometimes. We’d spot them spearfishing and snorkeling/diving bridges or shallow water wrecks but you can’t touch them so there was never any sense in fighting them unless we wanted to risk breaking some rods.

It’s pretty awesome that BlacktipH has been able to raise the profile of these fish by sending tens of millions of YouTube views their way so the species is slowly becoming a household name amongst the fishing community.