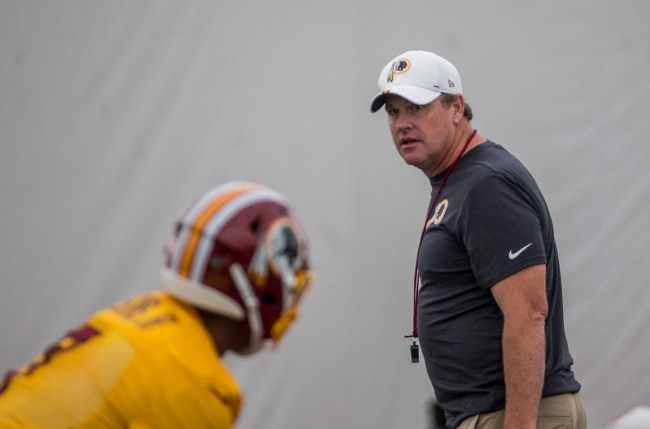 The former Redskins coach spoke with The Dan Le Batard Show on Tuesday about an array of topics about an array of topics–unemployed life (he’s playing a lot of golf), his former team securing its first win (he didn’t watch it), his future (may dabble in TV or radio), the Redskins culture (he didn’t take the bait in saying anything negative), and quarterback Dwayne Haskins.

Reports about Gruden never wanting to draft Haskins and the 22-year-old picking up on that swindled earlier this month and led to countless memes like this one.

Dan Snyder: ENOUGH OF THE SHIT JAY… PUT DWAYNE IN THE DAMN GAME

Gruden expanded on that sentiment on Tuesday, calling Haskins “very raw” and claiming he was never quite ready to step in and start under his tenure.

“With Case Keenum coming here for one year and Colt McCoy coming back from a broken leg, we didn’t know how long Colt would be out. So the fact of the matter is we had to get a quarterback in the draft somewhere, some time, and Dwayne is a great prospect. So we chose to take him as an organization.

Unfortunately, you know – people are excited, when you take a guy at 15, you want to see him play right away. But it was our professional opinion that he wasn’t quite ready to step in and play in the first five games of the season, in my opinion. It will take some time for him. He only played 13 or 14 games as a college player. I think he’s very raw, but he’s very talented, and it will take some time with him. Just wasn’t ready when I was there, and maybe he’ll get ready in the coming weeks.

It was the direction we decided to go. There was some other quarterbacks that some people liked in that building later on in the draft, but we chose Dwayne and tried to make the most of it. He’s still got a chance to be a great player, without a doubt.”

In the one game Haskins stepped in against the Giants, he threw for just 107 yards and three interceptions.