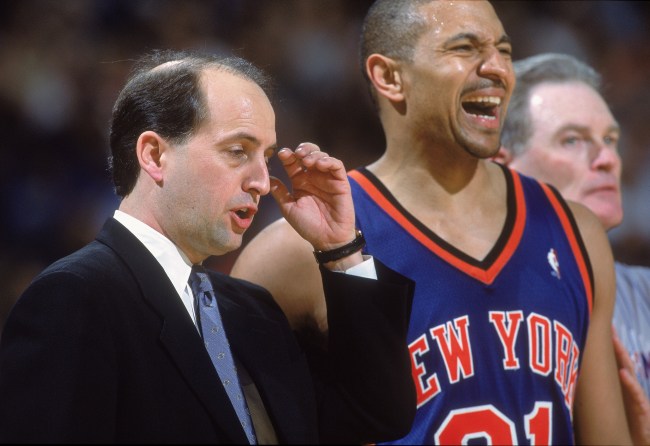 Joel Embiid was in his bag last night. The Sixers big man dropped 33 points on 50% shooting while adding 10 rebounds and 5 blocks en route to a 116-95 drubbing of the Toronto Raptors. The 25-year-old’s performance prompted color commentator Mark Jackson to utter a scorching hot take after Embiid threw down a windmill dunk to add an exclamation point to the W.

Jackson’s words exactly: “It would be a crime if he left the game and wasn’t in the discussion as one of the best big men of all-time.”

“It would be a crime if he left the game and wasn’t in the discussion as one of the best big men of all time.” – Mark Jackson pic.twitter.com/hTw1Z0eySl

At just 25, Embiid’s trajectory is astronomical, but to deem it a “crime” if he isn’t mentioned with the best big men of all-time when it’s all said and done is like crowning Bronny James with the 2024 Rookie of the Year.

Jeff Van Gundy made sure to tell Jackson to slow his role.

It’s a shame Van Gundy wasn’t around to shame Jackson for preemptively declaring Kobe better than MJ years ago.

Hey it’s not like Mark Jackson has ever made a sweeping statement regarding a player’s place in history too early ever before… pic.twitter.com/F6K0Lkzh93

I get what Mark Jackson is saying on ESPN. Joel Embiid has the POTENTIAL to become the greatest big man ever. I just have doubt his body will allow that. But when a man that huge can make free throws and threes with the touch Embiid has, he does have all-time great POTENTIAL.

I'm dying at Mark Jackson. Son is on that CRACK