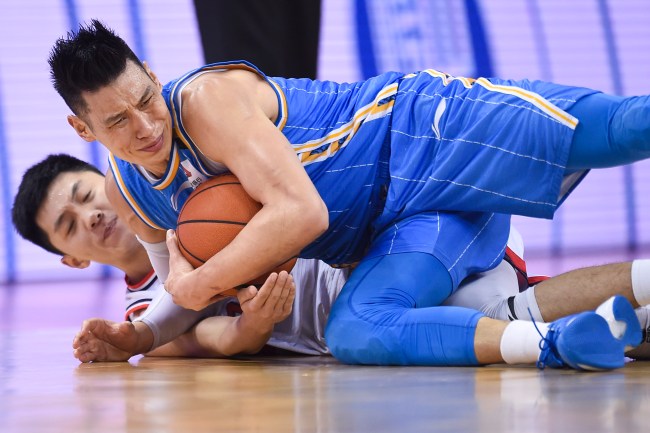 Last year, Jeremy Lin broke Bill Burr’s first rule of manhood (Bury your emotions, act like you have answers) when he broke down in tears over NBA teams giving up on him in free agency.

Many accused Lin of being over-dramatic when the Harvard product claimed the NBA’s rejection of him drove him to “rock bottom,” despite earning over $65 million during his nine-year NBA career and being just weeks removed from becoming the first ever Asian American to win and NBA title.

Lin didn’t take to the CBA like Marbury did. Aside from his team losing in the semi-finals to the eventual champions Guangdong Southern Tigers, just last month Lin asked for better protection in the CBA after being in the hospital for a cornucopia of health issues—ankles, knees, neck, ears, and…hearing.

According to league statistics cited by Chinese media, Lin was one of the most fouled players in the CBA over the past few years

“We basically play the game and hit people at the same time,” Lin said after a loss last month.

“I can understand if you hit and hurt your opponent by mistake, but [it is unacceptable] if you do it on purpose or the referee doesn’t protect the players.

“We want to be safe on the court, that’s all I can say. I’ll leave the rest for you guys to discuss.”

Lin, who averaged a respectable 22.3 points, 5.7 rebounds and 5.6 assists per game during the regular season for the Ducks, tearfully announced this week that he is leaving China in pursuit of the NBA comeback that eluded him last season.

We are with you, Jeremy Lin 🙏 pic.twitter.com/QWm3SoE5Rd

“In the end, although Shougang (the Ducks) has treated me incredibly well… giving me everything I wanted, in the end, I feel that I still have NBA dreams.

“I still have time to play (there) and I have to chase this.”

“Why was this decision so difficult? Yesterday, when I shared this with my family and friends, when I told them I would have to leave China, I cried.”

⚡🆕⚡ Jeremy Lin just declares he decides to continue to chase NBA. @JLin7 also says: This past season was an honor for me! See you next time! Thank you all for your support! pic.twitter.com/VLUxGS0ApP

It’s honorable for Jeremy Lin to chase his dreams even though every NBA team was already like “Nah.” You’d have to imagine Lin seeing Jared Dudley on a championship contending team makes him believe anything is possible. Hell, I may head outside right now and launch a few jumpers. Still got four years of college eligibility.