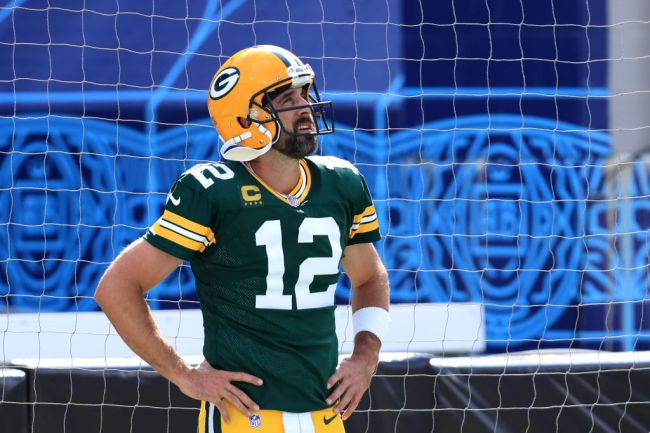 Aaron Rodgers and the Packers didn’t get off to the start they wanted to begin the 2021 NFL season. Rodgers was abysmal and the Packers were embarrassed in every facet by the Saints in Green Bay’s 38-3 loss on Sunday.

You can’t put the loss entirely on Rodgers’ shoulders, but he is the quarterback and he was unable to lead his team to score a single touchdown.

Rodgers threw for just 133 yards and two interceptions, which is a stat line we honestly never see next to his name.

Former Packers tight end Jermichael Finley seems to have it figured out as to why Rodgers looked so bad against the Saints. In his mind, Rodgers doesn’t have the work ethic anymore, which Finley says he can see “through his helmet.”

“I just don’t see the work ethic in Aaron Rodgers that I have in previous years,” Finley said during his appearance on ESPN’s KJM. “And actually, you can see it right through his helmet. The eyes and the face tell everything about the personality. And I don’t see that NFL hunger and that hunger to go win another championship.”

There are 16 games left on the schedule and Rodgers has bounced back after poor outings in the past. Finley’s remarks here are undoubtedly an overreaction, and it’s not the first time he’s taken shots at Rodgers.

Finley isn’t one to shy away from an opportunity to bash Rodgers according to the reaction on Twitter.

LMFAO oh wow here’s a fresh take. ESPN goes and digs out Jermichael Finley for a bashing take of Aaron Rodgers. Greg Jennings coming up next I’m sure. These are the only 2 guys for a decade who have spewed this.

Every time Jermichael Finley decides to publicly take shots at Aaron Rodgers, I think of 12's reaction from a few years ago: pic.twitter.com/PVmbqyEMdK

Now, if Rodgers and the Packers don’t have a bounce-back performance against a bad Lions team at home this weekend then there may be a reason for concern.