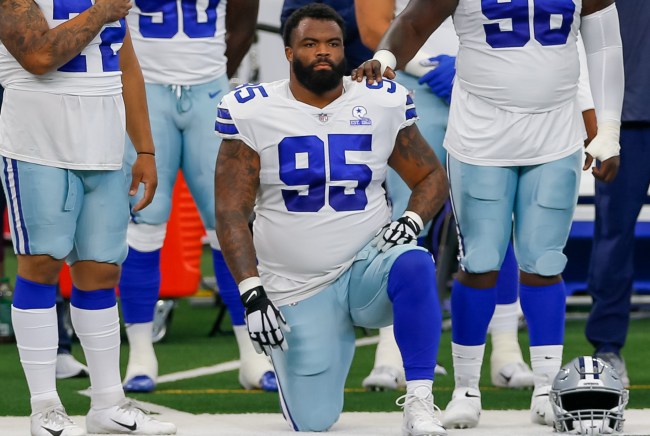 Earlier this year, a number of former NFL linemen spoke with ESPN about adjusting to life after football and the struggles that come with eating like a normal person after spending years forcing yourself to down as much as possible in order to become and remain the massive humans they’re paid millions of dollars to be.

Eddie Lacy famously struggled with his weight thanks in no small part to his well-documented love for “China food,” but as a running back, he was expected to stay a bit slimmer than guys at positions where you’re practically obligated to be an almost impossibly large person—especially those in the trenches.

However, it’s apparently still possible for players on the line to be too big—including 346-pound defensive tackle Dontari Poe, who was cut by the Cowboys on Wednesday. According to ESPN, Jerry Jones says Poe wasn’t living up to expectations and cited his excessive weight as a major factor, saying:

“When you’re 30 pounds overweight and you’re not doing anything about what’s keeping you from performing well on the field, there is no reason to get into the other stuff.”

Poe had incentives in his contract that could’ve earned him up to $500,000 if he’d manage to hit certain benchmarks by cutting some pounds, so this issue wasn’t exactly a secret. However, it’s worth noting he was the only member of the Cowboys to take a knee during the national anthem prior to their opener—which Jones was vocally opposed to a couple of years ago before changing his tune a bit ahead of this season—and some fans appeared to believe the owner took note of the act when it occurred.

Cowboys NT Dontari Poe was team’s only player to kneel during national anthem. He is the first Cowboys player to ever do so. Reserve NT Antwaun Woods stood behind him, placing hand on Poe’s left shoulder. The two slapped hands and hugged when song concluded. pic.twitter.com/uh0yXBic9a

As a result, you’re naturally going to have more than a few people go down the “I just find it funny…” route and the outlet attempted to get some insight into whether or not the protest played into the decision. However, Jones not only declined to take the bait but spit it back in their face, saying:

“I understand your question, and I’m deliberately not going to answer it. We have a platform here, but the platform on the football field has a high standard, and he was not up to the standard. He needed to correct that, and he did not. I’m going to leave it at that.”

At this point, it’s futile to even attempt to get into the head of Jones, a man who insists on having the final say when it comes to personnel decisions without offering any real explanation or accepting the blame for some of his more questionable moves. He also has a tendency to make excuses while insisting he’s not doing exactly that, so while he’s provided talking heads on radio and television with plenty of things to discuss, it’s almost fruitless to debate this issue when we’ll never know for sure.