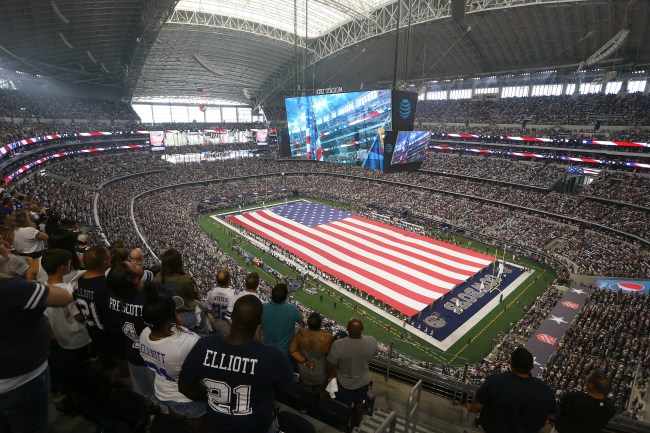 Dallas Cowboys players have been given the “green light” to protest police brutality during the anthem before their opening game this weekend but Jerry Jones hopes his players are sensitive to how fans will react while planning their protest.

While speaking to the media on Thursday Cowboys defensive end Tyrone Crawford revealed the team was planning on doing something eye-catching with their protest in an effort to “make a boom” and actually “create some change.”

“We definitely [have] the green light on all that, but also just trying to find something that’s going to make a boom. It’s not just going to be something that people look at it one time and kind of swipe by it, they’re like, ‘Oh that’s great. The Cowboys did that’ and swipe by it,” Crawford said.

Jerry Jones went on his radio show on 105.3 the Fan on Tuesday morning and once again reiterated that he wanted his players to be mindful of the fans watching when planning their protest.

Jerry Jones addressed Cowboys anthem plans again: "I would expect the Cowboys to show great sensitivity and I hope fans will receive it, however each individual presents it, I hope they receive it as genuine ask for help, in our society, we got some things we need to address."

Jerry Jones: I want our players to be very sensitive to just how important it is to the majority of our fans, more than any other team. How sensitive they are to what this great country is and what our flag stands for https://t.co/dmxEelP86l

Jerry Jones on fans possibly turning away if a player kneels: I am very sensitive. Everybody knows where I stand. No equivocation at all https://t.co/iJdP1G2lS7

Cowboys QB Dak Prescott says the team is divided in how they’re going to protest but have had discussions about what Jones told them about being graceful in expressing themselves.

“We’ve had private conversations, and it’s about expressing yourself. I wouldn’t say it’s going to be about expressing one idea. That’s where we are in this country right now,” Prescott said. “Individuals have different thoughts, different perceptions, and different feelings than their neighbor. So, for you to force your opinion and your perception on somebody, I think, isn’t very important right now. It doesn’t matter.

As I said, those are more private conversations, and I can’t say there’s been one direct answer or one direct way that we’re going to go about it. But I sure hope so, that’s what this country is about. The freedom to do that, the freedom to express yourself. We heard Mr. Jones talk about grace and sharing grace and having grace with players in what they want to do. If I had it my way, that’s exactly what we’d do, is express ourselves individually, but love and support one another collectively.”