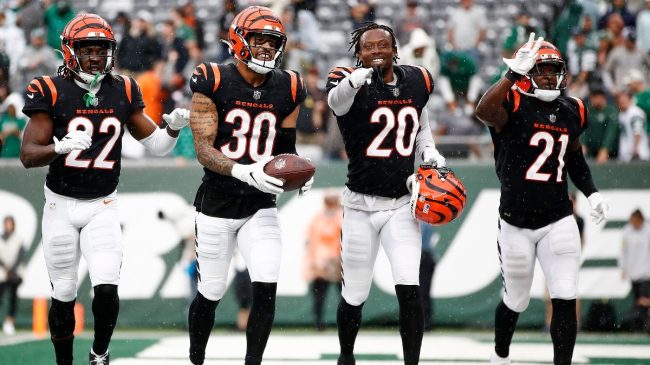 There has been a lot of trash-talking leading up to the Thursday Night Football matchup between the Miami Dolphins and Cincinnati Bengals. Tyreek Hill certainly wants to redeem himself against Eli Apple and Tua Tagovailoa has backed his wide receiver. Now, it sounds like star safety Jessie Bates has entered the chat and is backing his Apple.

According to PFF, Bates is backing up his teammate 100 percent. The Bengals’ star safety chimed in on the trash talk, stating “I don’t know if Eli got him tickets to the Super Bowl last year or not. I think that’s probably why he’s a little upset… If somebody comes after Eli [Apple], he comes after all of us.” Those are some strong words from Jessie Bates ahead of Thursday night’s game.

It’s rare to hear two teams go back and forth the way the Dolphins and Bengals have. Usually, teams are respectful towards one another. However, Tyreek Hill and Eli Apple have some unfished business. The trash talking has boiled over, to the point where Jessie Bates and Tua Tagovailoa have now commented on the rivalry between Hill and Apple.

So, make sure to have your popcorn ready because this should be an entertaining matchup throughout. The Bengals have struggled early, but they have the tools necessary to upset Miami. Meanwhile, the Dolphins have been red hot and hope to maintain their winning streak against Cincinnati.

All eyes will be on Tyreek Hill and Eli Apple throughout the night. However, it appears Jessie Bates is going to do everything possible to help out his teammate. Buckle up for a showdown because things are getting heated!