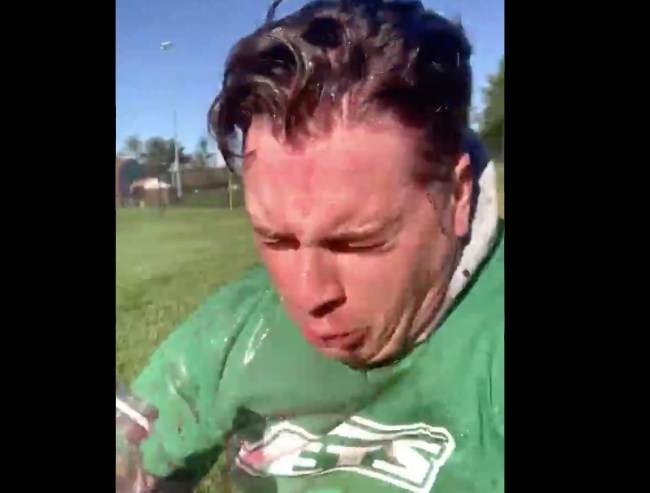 We all know how Murphy’s law goes, “what can go wrong, will go wrong,” or something like that. The New York Jets have taken that expression a step further because in their case, what can go wrong, absolutely will go horrifically wrong.

We all know the Jets are off to an abysmal 0-4 start and have shown no signs of winning a game anytime soon. With very little to be excited about from a football standpoint, a Jets fan decided it was time to take the Fleetwood Mac ‘Dreams’ challenge into his own hands and ended up doing so in the most Jets way possible.

A Jets fan tries to hop on the trend pic.twitter.com/aFAcTpBcBH

Leave it to a Jets fan to completely screw this trend up. Thirteen seconds of this guy just cruising down the street just like the initial viral video showed until he completely stalls out and falls face-first into the dirt. A poetic way of describing not only the Jets’ 2020 season but the last couple of decades since the Joe Namath era.

To me, any hope of the Jets making something out of this season has just been taken away from me by this video. If we can’t even create a simple video without destroying our brand, how are we going to win a couple of football games without doing so? Just another day in the life of a New York Jets fan.

Nathan “Doggface208 ” Apodaca started this viral challenge by cruising down the street on a skateboard with Fleetwood Mac’s ‘Dreams’ blaring in the background and smashing a bottle of Ocean Spray Cran Raspberry.