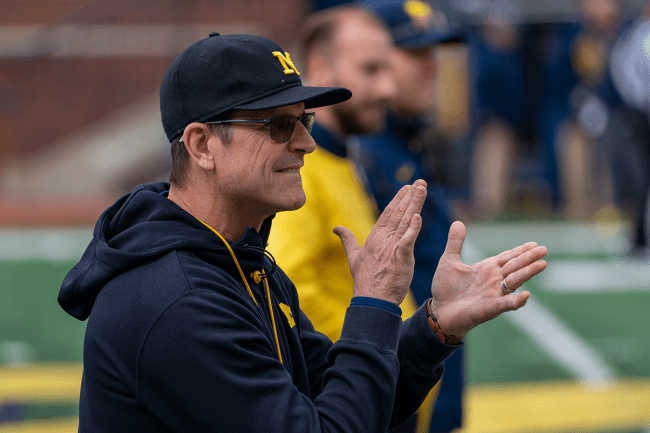 Jim Harbaugh is known for his intensity and his khakis. The 58-year-old head coach of Michigan football quickly rose to the top of the coaching ladder after retiring from the NFL in 2001.

After two years as the quarterbacks coach with the Raiders, Harbaugh was hired as the head coach at the University of San Diego in 2004 before taking the same role at Stanford, with the 49ers and now the Wolverines. He has worn khakis all along the way.

In fact, his pants are so legendary that there is even a beer made in their honor. They are such a big deal that people panicked in 2020 when Harbaugh did not wear them during his team’s season-opener.

He even wore them while working out on vacation in Italy this summer. If we didn’t know differently, which we don’t, it would not be crazy to think that Harbaugh wears khakis while he sleeps.

Michigan football is currently bonding as a team. Before fall camp begins in August, the Wolverines are traveling around the state to see fans and enjoy each other’s company.

After stops in Flint and Grand Rapids, Michigan stopped at Pere Marquette Beach in Muskegon on Saturday. They spent the afternoon playing cornhole and spikeball, enjoying a chartered fishing trip and hung out in the summer sun.

Fans joined the team throughout the day and it looked like a lot of fun.

Jim Harbaugh is a popular man in Muskegon at Pere Marquette as Michigan enjoys some time on the beach.

Hear from the team on their Michigan tour later today on @wzzm13. pic.twitter.com/vZjJ6di4U6

Jim Harbaugh (@CoachJim4UM) and @UMichFootball are in Muskegon today at Pere Marquette Beach, fans are getting autographs and taking pictures with Harbaugh and the players!

While most of the team showed up in bathing suits, shorts, and beach clothes, Harbaugh did not. He was rocking his signature khakis and it could not have been more on-brand.

Although he bunched them up to capri-length, Jim Harbaugh was wearing khakis while on a beach trip. It was perfect.

Jim Harbaugh and the khakis out in full force today at Pere Marquette in Muskegon as a part of the Wolverines trip across the state. Hear from the Coach and North Muskegon native Noah Stewart tonight on @FOX17. pic.twitter.com/2uZhnQxILb

@CoachJim4UM a friend of mine saw you at the beach. Having a moment with your son, he chose not interrupt. He captured this and wanted to share. pic.twitter.com/3r8GRVvSch

The Wolverines open camp next month and there is very little doubt that Harbaugh will be in khakis. If there was any opportunity for him to branch out, it was at the beach. He chose not to do so and I, for one, am so glad that he did not.