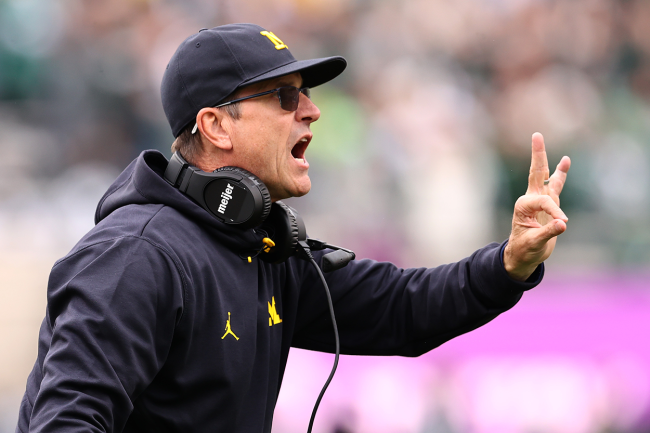 To imagine Jim Harbaugh as the head coach of the Kansas Jayhawks in 2022 is laugh out loud funny. That was not necessarily the case 13 years ago.

According to a wild new report from The Athletic’s Jayson Jenks and Rustin Dodd, it almost happened.

Back in 2009, Harbaugh was coaching at Stanford. He had just gone 8-5 with the Cardinal, which was his best year with the program at that point.

On the other end, Kansas was two years removed from its best season in program history. The Jayhawks went 12-1 in 2007 and won the Orange Bowl, had reached four bowl games in eight years under Mark Mangino and was not considered anything close to the perennial basement dweller it is today.

In fact, it was considered the opposite. Kansas was ranked in the top 20 as recently as October of 2009 and had just invested in a new football facility and practice fields.

However, despite Mangino’s success, he was forced to resign over accusations about his mistreatment of players. The Jayhawks needed a new coach and Harbaugh was considered to be one of the rising stars in the industry.

In addition, Harbaugh’s wife grew up 40 minutes away from Kansas’ campus in Lawrence. It was almost a no-brainer for both sides — at the time.

As a result of the combination of factors, Kansas interviewed Jim Harbaugh for the head football coaching position in December of 2009.

Here is what Jenks and Dodd had to say in The Athletic about the meeting itself:

Jim Harbaugh just wanted to get comfortable, so despite the stuffy setting — a job interview in a hotel suite in New York City — he asked if he could get a little informal.

“Guys, do you mind if I loosen up my tie or take my tie off?” Harbaugh said, according to a person in the room. “I’m not really a shirt-and-tie kind of guy. Can I take my jacket off?”

Harbaugh, then in his third season at Stanford, was meeting with members of Kansas’ athletic department, including athletic director Lew Perkins. Days earlier, Kansas coach Mark Mangino had resigned after accusations about his mistreatment of players.

Harbaugh walked over to the bar and asked if anyone wanted a drink. Then he emptied a can of Coke, put in a rather sizable dip of chewing tobacco and used the can as a spittoon.

“I just want to be Jim Harbaugh for you all to see who I am,” he told the room.

Nevertheless, despite those hesitations, if the Kansas Jayhawks had offered the head coaching job to Jim Harbaugh in 2009, the belief is that he would have accepted.

Instead of offering Harbaugh the job, Kansas hired Turner Gill and quickly became the worst Power 5 program of the 2010s. The Jayhawks are currently continuing to work themselves out of the hole they dug themselves by passing on Harbaugh.

Obviously, there is no way of knowing how things would have worked out. However, Harbaugh went on to win 12 games and an Orange Bowl at Stanford the next season, left for San Francisco and led three-straight 11+ win seasons and then ended up in the College Football Playoff last year in his seventh year at Michigan.

Meanwhile, Kansas has not won more than three games in a season since.