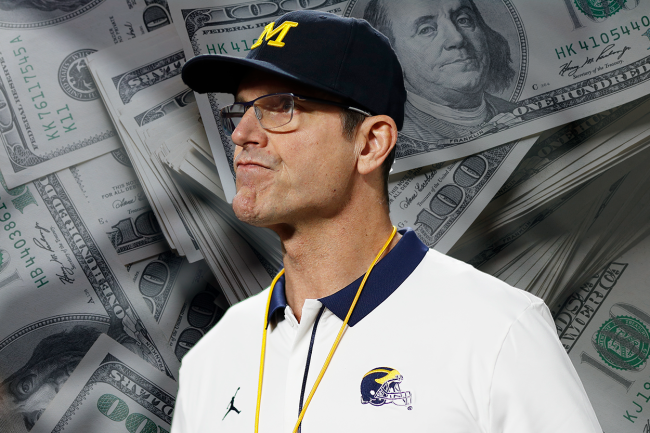 Jim Harbaugh is set to be the head football coach at the University of Michigan through 2026, should he choose to stay that long. However, the buyout included in his new contract leaves the door open for him to leave before then.

During the offseason, Harbaugh was considered to be in the mix for a few NFL head coaching opportunities. In particular, the 58-year-old was closely linked to the Vikings and was fully prepared to leave Ann Arbor for Minnesota.

Ultimately, he was never offered the job.

After missing out on a return to the NFL, where he led the 49ers from 2011-2014, Harbaugh made a very bold claim. He called Michigan’s athletic director Warde Manuel and said that the interview with the Vikings was a “one-time” thing.

Only time will if Harbaugh is telling the truth, but his new contract leaves the door open.

On Wednesday afternoon, it was announced that Michigan had agreed to a contract extension with their head coach that will last through 2026.

“I love Michigan Football, the University of Michigan and the Ann Arbor community,” Harbaugh said in a statement. “My family and I are excited to continue leading this football program, and we are thankful for the support that our athletic department and university administration have demonstrated toward the team. I appreciate all that our players, coaches and staff are doing to excel on and off the football field. My enthusiasm for tomorrow, the day after and every day following is as high as ever, and we are ready to get on the practice field and start preparations for the 2022 season. Go Blue!”

While Harbaugh’s statement is good and well, it isn’t written in blood and the NFL can still come calling.

On Thursday morning, the details of Harbaugh’s contract were announced. He will collect a base salary of $655,000 per year through 2026 plus “additional compensation” for television, radio and public appearances.

When the base salary and additional compensation are combined, Harbaugh will make more than $7 million per year. And that doesn’t include bonuses:

No matter how much money he can earn, that doesn’t mean that Harbaugh will stay with the Wolverines. His buyout makes it very easy for him to leave.

Harbaugh’s buyout is basically inviting NFL teams to keep calling, despite his promise to Michigan that his interest in returning to the next level is a “one-time” thing.