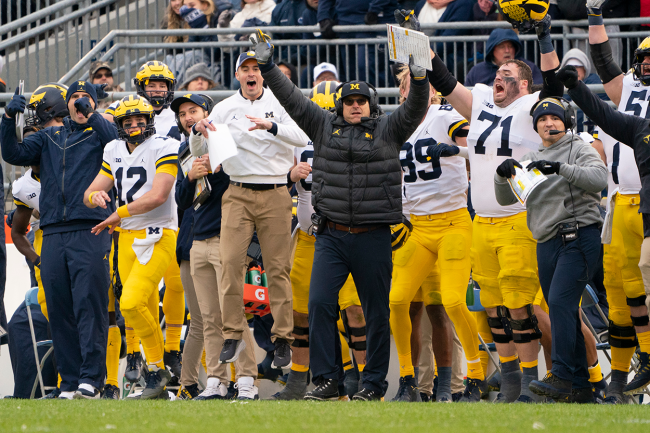 Michigan football had to do whatever it could to leave Happy Valley with a close win over Penn State on Saturday. Running back Hassan Haskins had 31 carries and Cade McNamara stood in the pocket and took some big hits en route to four touchdown passes.

Perhaps most notably, Jim Harbaugh coached the first half of the game with his pants burnt to a crisp. As one of the more “fiery” coaches in college football, he took his role a little bit too literally.

At some point during the first 30 minutes, Harbaugh had the back of his left pant leg burn up in front of a space heater.

Jim Harbaugh's pants got burned by the space heater on the sidelines in the 1st half pic.twitter.com/RPF60G3UwZ

He did get a change of pants in the locker room at halftime.

In case you’re wondering, yes, he acquired new pants in the 2nd half pic.twitter.com/lZjaSODCdD

Harbaugh’s pants have long been a topic of discussion. For years, the 57-year-old only wore khakis. It was a running joke that was so highly-discussed that Harbaugh eventually succumbed to the pressure and switched it up.

Perhaps Saturday’s burning pants was an omen. Does this mean that Harbaugh is back? Is Michigan for real?

Maybe it it means that he is on the hot seat? Literally?

Harbaugh has said that this is the year that the Wolverines are going to beat Ohio State. We will find out whether that is true or if he is a liar whose pants are on fire in two weeks.