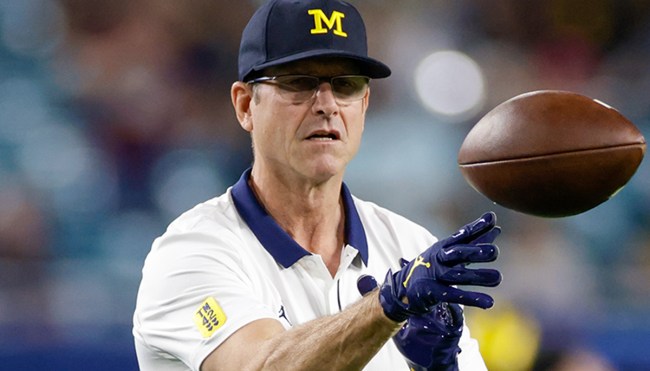 Since taking over as the head coach of the Michigan Wolverines, Jim Harbaugh has firmly established himself as one of the most entertaining figures in college football as well as one of the most Certifiably Weird Dudes you’ll ever encounter (I want to stress that I use that phrase as a term of endearment, as I adore the many quirks that make the diehard khaki-lover the loveable oddball that he is).

Many of the tales that define Harbaugh’s mythos stem from his wacky misadventures on the recruiting trail, like the time he wore cleats inside a prospective player’s house, tried to prove some kind of point by climbing a tree at another’s, and decided to partake in an impromptu slumber party during a late-night visit.

Now, he’s added to his legend yet again thanks to the move he pulled while visiting a high school in Florida.

On Thursday, Harbaugh stopped by Jesuit High School in Tampa while making the recruiting rounds. While there, he met with the coach of the state champion Tigers and also got to take a tour of their facilities—including a stop in the weight room, where he seized the opportunity to pound out some squats while rocking some business casual garb.

For college coaches such as Michigan's Jim Harbaugh, life on the road recruiting can make it difficult to get in a daily workout.

So today in the Oliva Weight Room at Jesuit, Harbaugh worked some squats into his visit.#AMDG l #GoTigers l #GoBlue pic.twitter.com/KeoftiJP4s

I don’t know if anyone needed any additional proof that Jim Harbaugh is a consummate Football Guy, but if you did, you certainly got some thanks to that.