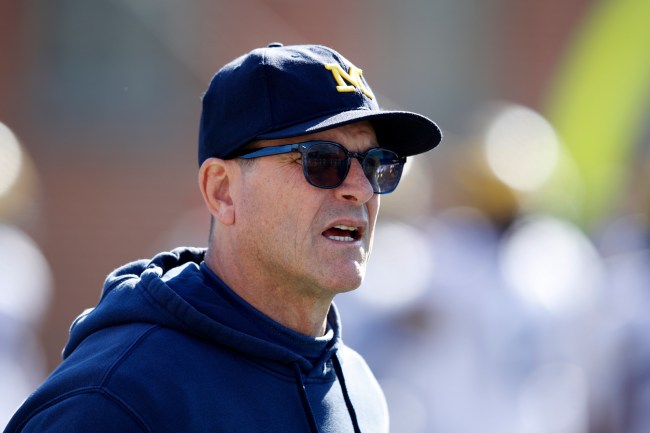 Whether it’s quirky or just him being totally weird, Jim Harbaugh has been known to do some strange things in his days. From having a sleepover with recruits to try and lure them to sign with the Michigan Wolverines, to being an odd ball while trying to pitch Peyton Manning to sign with the San Francisco 49ers years ago, the college football head coach sort of stays true to himself — but that’s not always a good thing.

We all got a little more insight into that on Tuesday, when current Tennessee Titans offensive lineman Isaiah Wilson described his experience with Jim Harbaugh during a recruiting trip in 2017. Point blank: It ended badly for the Michigan head coach.

As a five-star recruit, Wilson was projected by most recruiting services to land with the Wolverines a few years ago, but, ultimately, decided to attend Georgia — where he started immediately and just got drafted No. 29 overall in the 2020 NFL Draft by the Tennessee Titans. Although it ended well for the player, the kid wasn’t too impressed with Harbaugh when the coach made an in-home visit to try and close the deal.

Talking to former and current Titans players Will Compton and Taylor Lewan on the most recent episode of Bussin’ with the Boys podcast, Wilson said it was Jim Harbaugh’s penchant for wearing cleats — and keeping them on inside the house — that made him wonder what in the fuck was wrong with the guy. No joke, it’s why, according to him, he didn’t play in Ann Arbor.

“Remember when [Michigan] first got the deal with Jordan [Brand]?” Isaiah began. ”[Harbaugh] just wouldn’t take off his cleats. He came to my in-home visit with cleats on his feet. And I have hardwood floors. And he’s just walking around with cleats bro. After that it was over.”

That’s absolutely insane. Like, what the hell was Harbaugh thinking? Sure, maybe showing off some drip with those Jordan cleats — which had become the Wolverines’ newest sponsor — was a good idea, but not by wearing them around as if he were in high heels. I just imagine the head coach prancing around in Wilson’s house like he was a girl going to prom, just flaunting these cleats.

While Jim Harbaugh may have fucked up his chances at landing the five-star recruit, he wasn’t the only big-time college football coach who missed his chance with Isaiah Wilson. That’s because the big man also told a story about Nick Saban not hugging him, which, in the end, was a big enough detail to the O-lineman not to consider Alabama as his college destination.

Per Saturday Down South:

“I was committed to ‘Bama for a long time,” Wilson said on the show.

“Nick Saban didn’t give me a hug, so I decommitted,” Wilson shared.

Why did that bother him so much?

All of this is so fucking weird. Jim Harbaugh wearing cleats in a recruit’s house. Wilson thinking that was strange AF. But then Wilson himself holding Nick Saban at bay for not giving him a hug. The shit that happens in college football recruiting is bizarre, and, clearly, this shows that every detail matters to some prospects.