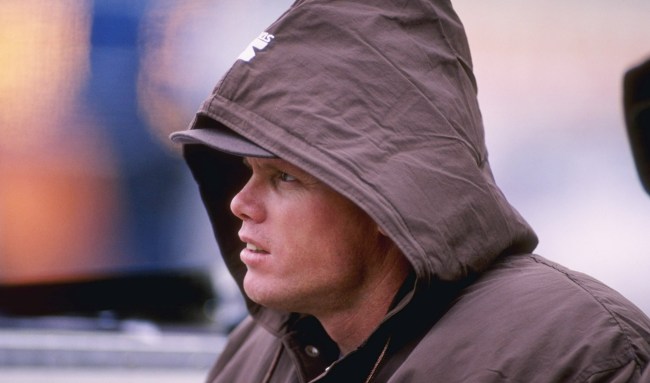 Six years ago, McMahon told Dan Patrick, “I was with Bill in Cleveland in ’95. He lied to me right to my face so I never trusted him after that. So all this stuff that happened, I’m sure he was right in the middle of [Deflategate].”

On Wednesday, while speaking to 850 ESPN Cleveland, McMahon doubled down on his feelings about The Hoodie.

Back in 1995, McMahon had been bouncing around the league after winning a Super Bowl in Chicago, playing very sporadically for the Chargers, Eagles, Vikings, and Cardinals.

Related: Jim McMahon Buries The Chicago Bears While Naming The Best Organization He Played For

Along the way McMahon made a stop in Cleveland, joining the Browns for training camp where the head coach at the time was Bill Belichick.

“After training camp [Belichick] called me in and says, ‘Hey we’re gonna have to release you. We’ve got a lot of guys hurt. We need some roster spots,’” McMahon told 850 ESPN Cleveland. “Then he said, ‘Hey no. But we really want you, we need you here.’ I said what are you telling me, Bill? He goes, ‘I want you to move here.’ If I’m gonna be here. I move my family here. They’re gonna be here for six months with me. I gotta find a hockey team for my sons. They were big into hockey at the time. So don’t screw me around. And he said ‘We’re gonna take care of you … We’ll pay you to sit out.’

“So I called my attorney and said, ‘Can I trust this guy, he said they’re gonna pay me to sit out? He said it’s probably only gonna be one or two weeks.’ So I ended up finding a house … to rent, found a hockey team for my sons. So I called in the first week on a Friday to get my check and get the runaround. I’m thinking first week jitters. The second week I called in for my check, got the runaround again. I sat here for seven weeks doing nothing in Cleveland … They finally signed me back Week seven or eight.

“I dressed three games — the eight, nine and ten weeks — and I got those checks. I confronted the G.M. at the time, what the hell was his name, Lombardi? He’s coming down the hallway and I said, ‘Hey man, I need my money. My wife was just in a wreck and I don’t want to deal with insurance.’ He looks at me and says, ‘Well, maybe we’ll pay you, maybe we wont.’ And I lost it. I just snapped. I grabbed him by the neck and threw his head against the wall and said, ‘You’re gonna pay me my money.” Then I started realizing what I was doing and I’m looking around the hallway to see if there were any cameras. I stopped hitting him and he slid down the wall.”

“I walked into the training room and called my attorney and said, ‘Hey get me cut right now.’ He called me back within two minutes and said they’ll release you if that’s what you want. So I had just walked out of the QB meeting to go to the rest room and all this had just happened in ten minutes. So I walk back into the QB meeting, it was Vinny Testaverde, myself and Eric Zeier and just said ‘Hey boys, I’ll see you all later. I’m outta here’ The coach said, ‘Have you talked Bill?’ I said, “You can tell Bill to kiss my ass. He’s a lying piece of shit.’ Then I was gone. The very next day I was up in Green Bay.”

Jim McMahon would go on to play two more seasons and appear in a total of six games throwing five passes total for Green Bay. However, in his second season with the Packers he ended up winning a second Super Bowl ring as a backup for NFL MVP Brett Favre.