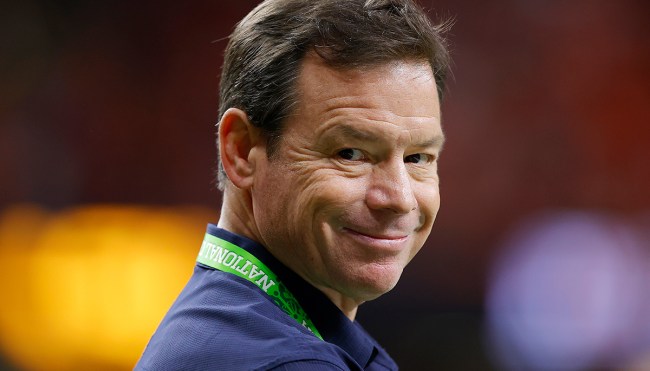 College football coaches are primarily judged for how their team performs on the field, but you obviously can’t overlook their ability to recruit the guys who are largely responsible for the success (or failure) of the person who patrols the sidelines.

The most important tool in a head coach’s arsenal is the ability to convince a player there’s no better way to set themself up for a bright future than taking their talents to the squad they helm. However, it’s also important to come across as somewhat relatable—which is easier said than done when you’re a grown man trying to sway someone who’s still in high school.

Over the years, Jim Harbaugh has repeatedly gone viral thanks to some of the incredibly wild moves he’s pulled while trying to get players to commit to Michigan. I don’t think there’s anyone in college football who’s able to top the bizarre approaches he’s taken, but Jim Mora Jr. came pretty damn close based on what unfolded when he visited with Najee Harris during his time at UCLA.

During Sunday’s game between the Chiefs and the Steelers, Rivals reporter Rob Cassidy recalled a strange story the Pittsburgh running back shared about a conversation he had with Mora prior to committing to Alabama, as the coach (for reasons we may never know) casually mentioned he knew the identity of the man who shot and killed Tupac Shakur in Las Vegas in 1996.

Najee Harris once told me that Jim Mora told him he knew who killed Tupac during a recruiting visit and I’ve never stopped thinking about that.

A number of people have come forward with similar claims concerning the identity of the shooter in the still-unsolved murder—as well as those who may have orchestrated it—but it’s unclear how Mora would’ve gotten an inside scoop (sadly, Cassidy said Harris didn’t provide any further information after revealing the random fact).